A smart, all-too-real thriller: My review of "Strait of Hormuz" by David Bunn 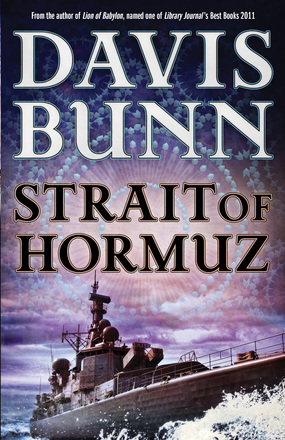 
"They're out there. The danger is real... and inbound."--Marc Royce

An under-the-radar phone call from the U.S. State Department puts Marc Royce once again on assignment--ferreting out rumors of a clandestine operation stretching from Asia to the Mideast. At stake is Iran's threat to blockade the narrow Strait of Hormuz, cutting off vital shipping routes and escalating global tensions beyond the breaking point.

Under the guise of investigating money laundering via high-end art purchases in Europe, Royce finds himself in Switzerland with only sketchy information, no backup, and without a single weapon other than his wits.

His appointment with a gallery owner in Geneva is a dead end--the man is on the floor with a bullet through his chest. But it turns out Royce does have backup. The Mossad has sent someone to keep an eye on this undercover op, which is of more than casual interest to the Israelis. And it's someone Royce knows...

A small team gathers around Royce--

a single objective against multiple enemies.

Marc Royce became one of my favourite characters with his debut in "Lion of Babylon", solidified this position in the excellent follow-up "Rare Earth", and now again holds firm in his stature with his excellent performance in "Straight of Hormuz". Royce is such a finely crafted character that he truly seems alive, a real hero that both men and women will enjoy reading about as he dashes across the pages putting his life on the line. I honestly found this book impossible to put down once I'd cracked the cover. From the first few pages to the final chapter, the intense, action-filled plot pulled me into the story and held me captive. The international intrigue and conspiracies woven into the story make for some solid entertainment, and the themes appear ripped from the headlines, capturing the tension in the Middle East that marks our world today. I enjoyed the manner in which Kitra especially seems to grow as a character in this story, finding a new confidence in herself as she steps into a new (and fun) role in the plot. The interactions between Marc and Kitra add just the right touch of romance to the story, and I turned the final pages satisfied with where we, the readers, are left in their relationship (though I admit I'm hoping for a return of these characters one day in the future!). As usual for Bunn, faith permeates the pages of the story, though it is done so subtly that people of many different faiths are likely to appreciate this book while being drawn to the truth of Jesus.

Davis Bunn has succeeded in becoming one of the few authors on my list whose books have achieved a "must have" status. If you are anything like me, then plan on getting "Straight of Hormuz". I highly recommend this book and award it 5 out of 5 stars.
Book has been provided courtesy of Baker Publishing Group and Graf-Martin Communications, Inc. Available at your favourite bookseller from Bethany House, a division of Baker Publishing Group.

Davis Bunn is the award-winning author of numerous national bestsellers with sales totaling more than seven million copies. His work has been published in sixteen languages, and his critical acclaim includes three Christy Awards for excellence in fiction. Formerly a business executive working in Europe, Africa, and the Middle East, Bunn is now a lecturer in creative writing and Writer in Residence at Regent's Park College, Oxford University. He and his wife, Isabella, divide their time between the English countryside and the coast of Florida.