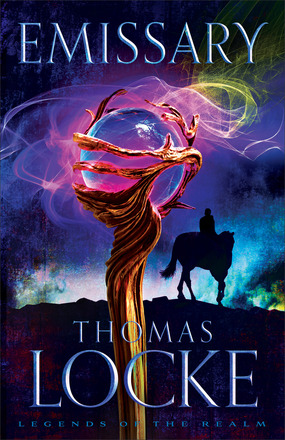 
With his twenty-first birthday, Hyam begins a journey that will lead him to his destiny--or his doom.

Hyam has always shown a remarkable ability to master languages, even those left unspoken for a thousand years. But now the shadow of suspicion that was cast upon him as a child prodigy at Long Hall is lengthening, and he must keep his identity hidden--or face annihilation.
As Hyam's mother slips toward death, she implores him to return to Long Hall before he settles down to farm his land. This journey born from duty becomes an impassioned quest for the truth. War is coming swiftly, and Hyam must rely upon his newfound powers and the friends he meets along the way in order to unravel the puzzling past and ensure that he--and the realm--will have a future.
In a world where magic has been outlawed for centuries, one young man discovers that he possesses powers beyond his wildest dreams. But he does not realize how pivotal this gift will be in the days to come.


Fans of Tolkien and C.S. Lewis will rejoice at a new addition to the realm of epic fantasy with the arrival of "Emissary".  From page one, I was captivated by Hyam and his story, as his status as orphan garnered my sympathy while the explosion of his powers onto the scene held me captive to the point I simply couldn't put the book down. I had to find out, just who is Hyam? How did he come to have these mysteries powers? I absolutely love characters who come from humble beginnings, only to discover that their future holds more than they could have imagined, and Hyam is just such a character. As with books by Tolkien and Lewis, "Emissary" isn't overtly Christian in that God or Jesus aren't mentioned anywhere in the pages. Yet Christian themes abound, from Hyam having a purpose that is beyond himself, to the age old fight of good versus evil. I greatly enjoyed watching Hyam discover his powers and fight for not only his own survival, but the survival of the world around him. This book has it all - mystery, intriguing characters, epic battles, and romance that serves to move the story forward.

Locke does an excellent job at setting up this story as the first in a series, because despite the triumphant ending readers are still left with an ominous sense of foreboding that there is much left undone, that Hyam's destiny isn't fully realized. So I found myself turning the last of the pages feeling unsatisfied by only one thing - I have to wait an entire year until I find out what is coming next for Hyam! However will I survive the wait?

Those readers who typically read fantasy novels are going to love this book. And those who have never given the fantasy genre a chance should definitely plan to do so now. "Emissary" is well worth the read. 5 out of 5 stars.

Thomas Locke is a pseudonym for Davis Bunn, the award-winning novelist with total worldwide sales of seven million copies. His work has been published in twenty languages, and critical acclaim includes four Christy Awards for excellence in fiction. He divides his time between Oxford and Florida and holds a lifelong passion for speculative stories. Davis's screenplay adaptation ofEmissary is currently under development as a feature film with a British production company. Learn more at www.tlocke.com.

Emissary (Legends of the Realm Book #1)