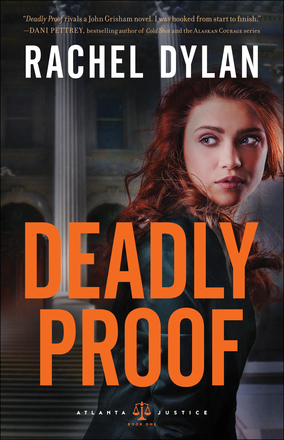 
Standing For What's Right Could Cost Her Everything

Tapped as lead counsel in a corporate cover-up lawsuit against Mason Pharmaceutical, Kate Sullivan knows this case could make her career. What really drives her, though, is getting justice for the victims whose lives were ruined by the company's dangerous new drug. But when a whistleblower turns up dead, it paints a target on the back of everyone involved.

Former Army Ranger turned private investigator Landon James steps in to handle security for Kate. He's still haunted by mistakes in his past and is determined never to let something like that happen again. But it soon appears someone is willing to do anything--even commit murder--to keep the case from going to trial.

As danger closes in, Landon can't help but admire Kate's courage and resolve--but will her determination not to back down become too great of a risk?

Starring a likeable, strong, female character who is willing to face down evil in the name of achieving justice, "Deadly Proof" is a compelling legal thriller with a gripping plot. I always enjoy novels with an aspect of David versus Goliath, and as Kate faces down a huge pharmaceutical company with a class action lawsuit, I couldn't help but cheer her on. I should mention that some of Kate's initial surprise over the less-than-ethical tactics of the bad guys at first seemed a wee bit unbelievable, because the circumstances are so suspicious I don't see how anyone could not assume an evil plot is afoot. But perhaps this is simply revealing that I read a lot of suspense novels and my view of human nature has become warped!
As the novel progressed, I grew to really appreciate Kate as a character, as she truly reflects God's heart for the oppressed. And seeing Kate take her heart for justice and funnel it into a good-versus-evil fight was fantastic! Dylan has woven in plenty of action into her story, and this kept me engaged and devouring the chapters. As a male reader I also particularly liked the light touch she uses with the romance angle, leading to a natural progression in the relationship between Kate and Landon. The side cast of characters further added a unique flavour to the story. I look forward to seeing where the other characters in this novel will fit into future books!

"Deadly Proof" is a fine start to the Atlanta Justice series, with great characters and an intriguing legal battle. Dylan is a relatively new addition to the world of romantic suspense, but I am sure she will quickly find a faithful following.

I award this book a solid rating of 4 out of 5 stars.

Rachel Dylan was a litigator in one of the nation's most elite law firms for over eight years and now works as an attorney at one of the Big Three automobile manufacturers. She is the author of four Love Inspired Suspense novels and lives in Michigan with her husband. She is active on social media, and you can visit her website at www.racheldylan.com.