A strong debut novel: The House on Foster Hill by Jaime Jo Wright 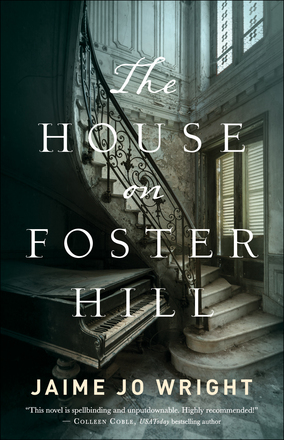 
Kaine Prescott is no stranger to death. When her husband died two years ago, her pleas for further investigation into his suspicious demise fell on deaf ears. In desperate need of a fresh start, Kaine purchases an old house sight unseen in her grandfather's Wisconsin hometown. But one look at the eerie, abandoned house immediately leaves her questioning her rash decision. And when the house's dark history comes back with a vengeance, Kaine is forced to face the terrifying realization she has nowhere left to hide.

A century earlier, the house on Foster Hill holds nothing but painful memories for Ivy Thorpe. When an unidentified woman is found dead on the property, Ivy is compelled to discover her identity. Ivy's search leads her into dangerous waters, resurrecting painful memories and forcing a reunion with the man who broke her heart. Can Ivy unravel the mystery and find a renewed hope before any other lives--including her own--are lost?

Jaime Jo Wright has positioned herself as a writer to watch with her strong debut novel, "The House on Foster Hill". With eerie suspense that builds from beginning to end, and a mystery that readers will enjoy unravelling along with the main characters Kaine (in the present) and Ivy (in the past), there is much to love in this novel! Wright has succeeded at crafting compelling characters, ones who wrestle through the same type of questions of faith that all people share as we face trials and struggles throughout our lives. I enjoyed the way that the author kept me guessing about what exactly was going on at Foster Hill, and I must say I didn't suspect the truth that eventually unfolds. I always appreciate an author who can truly surprise me, and Wright has done exactly that in the manner that she reveals the mysteries of the House on Foster Hill!

I do have to say that I most enjoyed Ivy's story that takes place around the turn of the century, as there is just something about her character that most spoke to me, perhaps because she was so unconventional and so misunderstood. It was her times of peril and also her times of triumph, along with the newly blossoming romance, that most held me in its grip. However, the author does a good job at weaving the past and the present together and moving the story forward as one. By the time I was two thirds of the way through the book, I knew that the rest of life was going to have to wait until I found out how things resolved - and boy, was the ending a good one indeed!

I don't know if we will be seeing these characters again in a future novel, but either way I am eager to see what Wright has in store for her next offering. If her debut is this good, her next is certain to be stellar indeed! I award "The House on Foster Hill" a solid rating of 4 out of 5 stars.

Jaime Jo Wright is the Publishers Weekly and ECPA bestselling author of two novellas, and a human resources director by trade. She lives in Wisconsin with her husband and two children, and The House on Foster Hill is her debut novel. Find her online at www.jaimewrightbooks.com.