Loved every moment! "The Sea Before Us" by Sarah Sundin 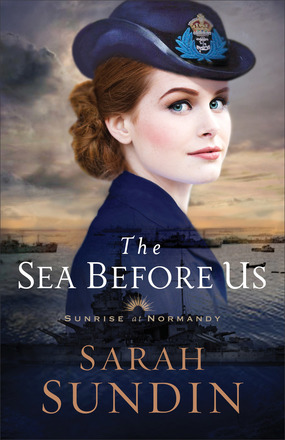 
Nothing but love could heal the wounds of war

In 1944, American naval officer Lt. Wyatt Paxton arrives in London to prepare for the Allied invasion of France. He works closely with Dorothy Fairfax, a "Wren" in the Women's Royal Naval Service, who pieces together reconnaissance photographs with holiday snapshots of France--including those of her family's summer home--in order to create accurate maps of Normandy. Maps that Wyatt turns into naval bombardment plans for D-day.

As the two spend concentrated time together in the pressure cooker of war, their deepening friendship threatens to turn into something more. But both of them have too much to lose to give in to love . . .

It is no exaggeration to say that I loved every moment of Sundin's newest novel, "The Sea Before Us"! She has crafted one of her most memorable books yet with this first offering in the Sunrise at Normandy series, delivering up characters you can't help but love and a setting in World War II Britain that made for some intense scenes. She truly brought 1944 to life with interesting historical details, and I love it when I learn something new in a book, like the fact that there was a "Little Blitz" later in the war that these characters live through, rather than just the Blitz of 1940-1941. I also enjoyed how the author highlights the significant role that the Wrens played serving in Britain's Women's Royal Naval Services around the world.

But of course, it is the characters that I most enjoyed. Both Wyatt and Dorothy were just so endearing, at times fun, at times serious, both trying to move past the deep wounds in their souls. I will even be manly enough to admit that there was a scene in the story that brought tears to my eyes, a scene of reconciliation that was beautiful to behold. I loved the way that the characters draw near to Christ. Even the romance wasn't too much for me, and I am certain that readers of all romantic sensibilities will find much to love here. The ending, while leaving you longing for more, will no doubt bring a smile to your face if you are anything like me! I dare not say more of the ending of course, but I can certainly assure you that this is one novel you are going to want to add to your collection.

Hopefully the wait for the next book in the series isn't too long, because I am eager to see how  Sundin works a miracle in the lives of Wyatt and his brothers, whose estrangement plays a significant role in the book. History, romance, and a plot that seems full of unexpected moments - what more could you ask for? I award this book a high rating of 5 out of 5 stars.

Sarah Sundin is the author of Through Waters Deep, Anchor in the Storm, and When Tides Turn in the Waves of Freedom series, as well as Wings of the Nightingale and the Wings of Glory series. Her novels have received starred reviews from Booklist and Library Journal. Her popular Through Waters Deep was a Carol Award finalist and named to Booklist's "101 Best Romance Novels of the Last 10 Years." A graduate of UC San Francisco School of Pharmacy, she works on-call as a hospital pharmacist. Sarah lives in California. Visit www.sarahsundin.com for more information.