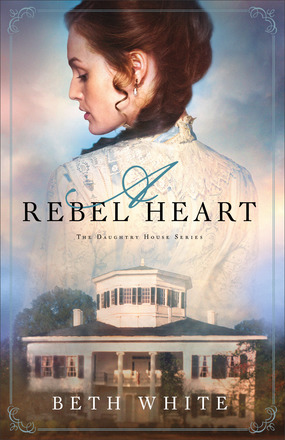 
Five years after the final shot was fired in the War Between the States, Selah Daughtry can barely manage to keep herself, her two younger sisters, and their spinster cousin fed and clothed. With their family's Mississippi plantation swamped by debt and the Big House falling down around them, the only option seems to be giving up their ancestral land--until a hotel management agent for the railroad offers her hope for the future.

If she'll turn her home into a hotel, Levi Riggins says, he can all but guarantee it will be saved. Selah isn't sure she entirely trusts the handsome Yankee. Yet what other options does she have? She'll have to stay on her guard . . . but she never expected to have to guard her heart.


Well, this was not entirely what I expected! I haven't read a Beth White novel before (try to hold in the gasps), and so I was thinking that "A Rebel Heart" would likely just be a solid sort of historical romance novel, which of course there is nothing wrong with. But White White blew me away with her dramatic, tightly plotted novel that satisfies from start to finish! The opening chapters had heart-break, suspense, and even some humour all at once, and I was hooked from that point on. She does a superb job at bringing history to life, and the novel breathes with realism as she deftly captures the angst of the south following the War Between the States. The myriad of different characters add depth to the story, and I enjoyed the manner in which Selah not only ignores societal conventions about what a woman can and can't do, but also ignores the role that African Americans should play at the same time. These themes led to some interesting scenes indeed!

While this novel is billed as a romance, I found the novel to have just the right touch, such that it will appeal to male and female readers alike. The way that Selah and Levi meet is highly entertaining, and feelings that quickly develop between them lead to a complicated but often humorous journey where you can't help but root for a happy ending between the two. (And of course, as I don't want to give anything away, you'll have to read this book for yourself to find out what that ending may be). There is plenty of interesting dialogue and surprising scenes that will have you flying through the pages to see how things resolve. Faith and forgiveness come to life on the pages, showcasing God's grace in action.

If you have somehow missed out on Beth White's novels like I had, then waste no more time and grab "A Rebel Heart". It kicks off what is sure to be an intriguing series, setting the bar high and leaving me looking forward to the next addition to "The Daughtry House" books.

Beth White's day job is teaching music at an inner-city high school in historic Mobile, Alabama. A native Mississippian, she writes historical romance with a Southern drawl and is the author of The Pelican Bride and The Creole Princess. Her novels have won the American Christian Fiction Writers Carol Award, the RT Book Club Reviewers' Choice Award, and the Inspirational Reader's Choice Award. Learn more at www.bethwhite.net.