An exciting start to a new series! "Storm Rising" by Ronie Kendig 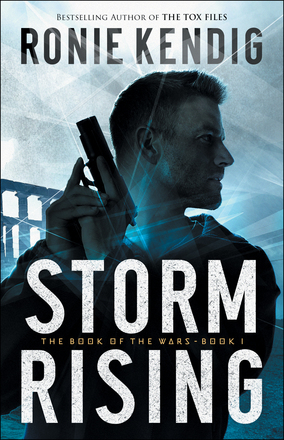 
Does an Ancient Book of Prophecy Hold the Answers to Saving the World . . . Or Predict Its Destruction?

Mentioned in the pages of the Old Testament but lost to history, the Book of the Wars has resurfaced, and its pages hold secrets--and dangers--never before seen on earth.

Tasked with capturing the ancient text, former Navy SEAL Leif Metcalfe is once more given command of his own team. But their best efforts are ruined when a notorious Bulgarian operative known as Viorica snatches the volume right out from under them.

Iskra "Viorica" Todorova is determined to use the book to secure the thing that matters most--freedom. But a series of strange storms erupts around the globe, and the coming dangers foretold in the text threaten crops, lives, and entire nations. Though both are haunted by secrets of the past and neither trusts the other, Leif and Iskra must form an uneasy alliance to thwart impending disaster. However, the truth hidden in centuries-old words could unleash a storm of their own destruction.

Ronie Kendig has crafted an epic tale that fairly crackles with tension from beginning to end! "Storm Rising" is marked by one action-packed scene after another, and there is nary a dull moment to allow you to put the book down.

As I devoured my way through "Storm Rising", there were many times that I felt like I was watching a movie play out before me. As Leif and his team are thrust into action, seeking out a book that can change history, I found myself caught up in the fantastic scenarios playing out before me, imagining a book of prophecy with such incredible power. I don't know where Kendig thinks up plots like these, but I found this novel to be every bit as good as the Tox Files series that proceeded it. The character of Viorica was an especially pleasant surprise, with wicked combat skills and a truly tragic past all rolled up into one serious fighting machine. The way that Leif and Viorica encounter each other and find themselves going from enemies to cautious allies made for some addictive reading. The end result is that Kendig has created characters who are not only amazing operatives starring in an entertaining story, but ones that have a real depth to them at the same time that makes the story have a richer flavour. By the time I got to the end of this first novel in the series, I had already realized that it's going to be a long wait indeed to find out what Kendig has in store next for these incredible characters!

From the eye-catching cover to the well-written story contained within, Kendig has offered up a truly exciting start to "The Book of the Wars" series. I award this book 4.5 out of 5 stars.

Ronie Kendig (www.roniekendig.com) is an award-winning, bestselling author of over twenty novels. She grew up an army brat, and now she and her Army-veteran husband live a short train ride from New York City with their children and a retired military working dog. Ronie's degree in psychology has helped her pen novels of intense, raw characters.