Delightful: "The Bridge to Belle Island" by Julie Klassen 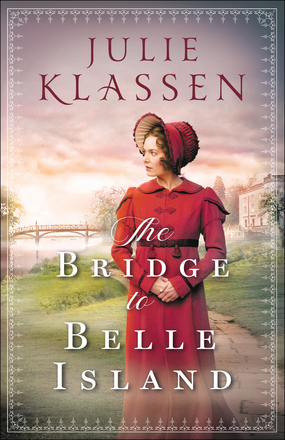 
After a humiliating mistake, lawyer Benjamin Booker resolves to never again trust a beautiful woman. When an old friend is killed, the senior partner isn't satisfied with Bow Street's efforts and asks Benjamin to investigate. Evidence takes him to a remote island on the Thames, a world unto itself, shrouded in mist and mystery. Soon Ben finds himself falling for the main suspect--a woman who claims not to have left the island in ten years. But is he a fool to believe her?

On Belle Island, Isabelle Wilder feels safe and leads a productive life, but fear keeps her trapped there. When Mr. Booker arrives with news of her trustee's murder in London, Isabelle is stunned. She has not left the island, yet she has a recurring dream about the man's death. Or is it a memory?

When a second person dies and the evidence shockingly points to her, Isabelle doesn't know whom to trust: the attractive lawyer or the admirer and friends who assemble on Belle Island, each with grudges against the victim. Can she even trust her own mind? While they search for the truth, secrets come to light and danger comes calling.


Set in the early 1800's, Julie Klassen's latest historical novel was a delight to read from start to finish! With elements of mystery that brought to mind the touch of Agatha Christie, and a fabulous setting on a beautiful Island on the Thames River, I was quickly drawn into the story of lawyer Benjamin Booker as he encounters Isabelle Wilder, his prime suspect for the murder of Isabelle's trustee in London. Klassen has thrown some unexpected twists into the plot of the story, ones that kept me turning the pages as quickly as I could, as I not only wanted to see how the mystery would resolve but wanted to see how things would end up for Benjamin and Isabelle and the residents of the Island.

Something I especially liked about this novel is the unique struggles that both Benjamin and Isabelle dealt with. It's certainly intriguing to think about how mental illness would have been viewed over 200 years ago and how this would have impacted people's lives! Such elements gave me an extra appreciation for these characters, as did the very real grief and loss that a number of the characters were walking through. Watching them deal with hardships and yet find the strength to continue on and care for others was inspiring to see..

In the end, I quite enjoyed "The Bridge to Belle Island", finding it well-written, with great characters and just the right touch of love to tie things together. It has been a while since I've last read a Julie Klassen novel as her prior series just didn't spark my fancy, but I can say that this novel certainly lives up to her reputation as one of the most loved authors in the Christian fiction sphere. I award this novel 4 out of 5 stars.

Julie Klassen (www.julieklassen.com) loves all things Jane--Jane Eyre and Jane Austen. A graduate of the University of Illinois, Julie worked in publishing for 16 years and now writes full-time. Her novels have sold over 1 million copies, and three of her books, The Silent Governess, The Girl in the Gatehouse, and The Maid of Fairbourne Hall, have won the Christy Award for Historical Romance. The Secret of Pembrooke Park was honored with the Minnesota Book Award for Genre Fiction. Julie has also won the Midwest Book Award and a Christian Retailing's Best Award, and has been a finalist in the Romance Writers of America's RITA Awards and ACFW's Carol Awards. Julie and her husband have two sons and live in a suburb of St. Paul, Minnesota.