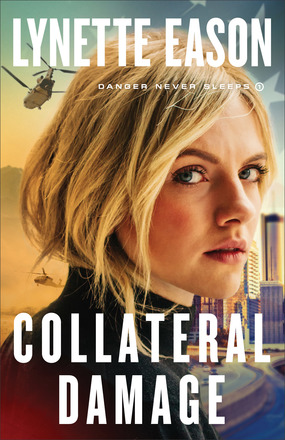 They thought they left the fight behind on the battlefield.
But their greatest struggles are just beginning.

Honorably discharged from the Army after an explosion nearly killed her, former military psychiatrist Brooke Adams has set up shop to help others, but her days of helping military personnel are over. She's got her own battles to fight from her time overseas, and she's not equipped to take on more.

Former Army Special Ops Sergeant First Class Asher James could handle anything that war sent his way. The only thing that scares him now is sleep. As the shadows close in, the nightmares begin.

Finally convinced that he needs help, Asher makes an appointment with a counselor. When he arrives at her office, she isn't there--but a dead body is. When it becomes clear that Brooke was the real target of the attack--and that her secrets go even deeper than his own--Asher vows to protect her no matter what.


The latest romantic suspense novel from Lynette Eason is one of her most satisfying novels to date, a fast-paced novel with twists and turns aplenty. The scenes from Afghanistan gave the book an intriguing foreign flavour, and the conspiracy that emerges over the course of the story is disturbing in the extreme, making the ending all the more fulfilling. Although I can appreciate some romance as much as the next person, I don't love books that seem a little over the top in that department. However, such is not the case here at all! Eason has just the right touch, as Brooke and Asher get thrown together into a race to uncover the truth of what has been going on both at home and in Afghanistan. The relationship that unfolds seems right and one that has all the needed elements, from friendship and trust to that spark of attraction too. I enjoyed reading about these characters with some deep flaws, both recovering from traumatic and stressful circumstances. Whether from serving overseas, experiences as a child, or the countless other ways that people can experience trauma, I'm sure that most readers will be able to relate to these character's struggles. Yet neither allows their past to define who they are now, and watching them work so effectively despite of or perhaps because of their difficult circumstances is inspiring to read about.

Those readers who have been craving a well-written novel that will keep them glued to its pages, and have them forgetting all about the real world around them, should look no further than "Collateral Damage". I myself found it to be a great start to the "Danger Never Sleeps" series, and I am definitely looking forward to what Eason next has in store! I award this novel a solid 4 out of 5 stars.

Lynette Eason is the bestselling author of Protecting Tanner Hollow, as well as the Blue Justice, Women of Justice, Deadly Reunions, Hidden Identity, and Elite Guardians series. She is the winner of three ACFW Carol Awards, the Selah Award, and the Inspirational Reader's Choice Award, among others. She is a graduate of the University of South Carolina and has a master's degree in education from Converse College. Eason lives in South Carolina with her husband and two children. Learn more at www.lynetteeason.com.