A gripping historical novel: "A Gilded Lady" by Elizabeth Camden 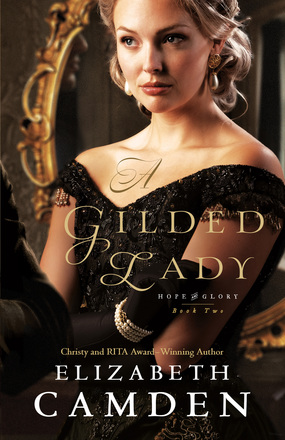 Caroline Delacroix is at the pinnacle of Washington high society in her role as secretary to the First Lady of the United States. But beneath the facade of her beauty, glamorous wardrobe, and dazzling personality, she's hiding a terrible secret. If she cannot untangle a web of foreign espionage, her brother will face execution for treason.
Nathaniel Trask is the newly appointed head of the president's Secret Service team. He is immediately attracted to Caroline's quick wit and undeniable charm, but his job leaves no room for distractions. Anarchist plots have led to mounting threats against the president, forcing him to put duty before his growing love for Caroline.
Amid the glamorous pageantry of Gilded Age Washington, DC, Caroline and Nathaniel face danger and heartbreak that shakes them to their core and tests all they know about love and sacrifice.


Between the covers of "A Gilded Lady" lies a gripping historical novel from one of my favourite authors, Elizabeth Camden. I quite enjoyed the first novel in the series, "The Spice King", and so I was not surprised to find that this follow-up was every bit as good as the first. I couldn't decide which aspect of the story I wanted to hear about, whether I wanted to watch Caroline dance through her fascinating role as secretary to First Lady McKinley, watch Nathaniel battle his past to develop the Secret Service program to protect the president, or join Caroline and her brother in their quest to free Caroline's twin Luke from prison. With multiple subplots in play, the novel fairly races by. But every so often Camden brings things to a thoughtful pause, allowing us to peer deeper into these character's hearts to see their doubts and feelings of uncertainty, endearing us readers to these characters all the more.
As a Canadian reader who has forgotten much of what I've learned about the history of US presidents, I'm humble enough to admit that the events involving President McKinley came as a plot twist to the story for me, even though all the American readers will know what is about to unfold. That made these events all the more heart breaking for me to read about, both for the McKinley family but also in how these characters were impacted by it, both Caroline and Nathaniel in their own way. I felt bad for Nathaniel in particular, imagining how difficult it would be to recover from that sort of event. You know that an author has succeeded at bringing characters to life when you want to reach into the pages and give them a hug and say a prayer with them!

All in all, I can attest that "A Gilded Lady" will absolutely please Elizabeth Camden's ever growing fan base, especially those who loved the first novel in the series as much as I did. It will come as no surprise that I award this novel a high rating of 4.5 out of 5 stars. February 2021 can't come soon enough, when we will be treated to the story of the final sibling in the family, Luke, with his novel "The Prince of Spies".
Book has been provided courtesy of Baker Publishing Group and Graf-Martin Communications, Inc.

Elizabeth Camden (www.elizabethcamden.com) is best known for her historical novels set in Gilded Age America, featuring clever heroines and richly layered storylines. Before she was a writer, she was an academic librarian at some of the largest and smallest libraries in America, but her favorite is the continually growing library in her own home. Her novels have won the RITA and Christy Award and have appeared on the CBA bestsellers list. She lives in Orlando, Florida, with her husband, who graciously tolerates her intimidating stockpile of books.