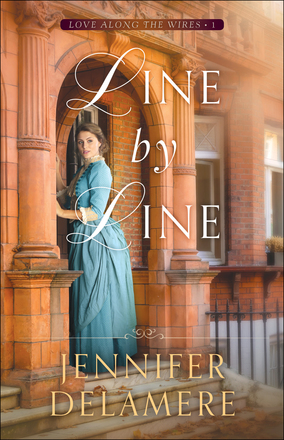 Can her dreams of independence withstand a dash of love?
Since she was young, Alice McNeil has seen a career as a telegrapher as the best use for her keen and curious mind. Years later, she doesn't regret her freedom in foregoing marriage, especially when she acquires a coveted position at an important trading firm. But when the company's ambitious junior director returns to London, things begin to change in ways Alice could never have imagined.

For Douglas Shaw, years of hard work and ingenuity enabled him to escape a life of grinding poverty. He's now determined to marry into high society--a step that will ensure he never returns to the conditions of his past.

He immediately earns Alice's respect by judging her based on her skills and not her gender, and a fast camaraderie forms. However, when Alice accidentally angers a jealous coworker and his revenge threatens both their reputations, Alice and Douglas are forced to confront what is truly important in their lives. Will their growing bond give them the courage to see the future in a different light?

Who knew that a book written for spinsters could cause so much trouble? Jennifer Delamere has written a highly entertaining novel in "Line by Line", following the journey of Alice, who is determined to live her life with independence and nary a thought of love, when her decision to follow some advice from "The Spinsters Guide to Love and Romance" takes her life down one unexpected turn after another. As an avid reader who could highly relate to the bookstore scenes where characters are sneaking books out of stores that they may not want someone to see them reading, I found myself thoroughly engrossed in these characters' lives.
While I immediately developed a liking for Alice, it took me awhile to warm up to Douglas, as sometimes his confidence bordered on cockiness. But as the layers were peeled back, and another character prods him to reconsider the reason God has put him on Earth, I developed a whole level of appreciation for him. The addition of a terrible injustice that Alice suffers meant that I simply couldn't put the book down (though I was tempted to throw it!), because I needed to ensure that all wrongs were set to right. I fully admit I entered into this story expecting a happy ending, and for those readers who have the same hope I did, I can assure you that the ending is exactly what you were looking for! The characters have learned a hard lesson or two along the way, but Delamere has expertly taken her characters on a journey that has shaped them into the better people they needed to become. And, quite sneakily, she has imparted some life lessons to us readers as well, as we are left pondering what really matters in life, and what legacy we want to be leaving behind us as we make our choices in life.
After greatly enjoying Delamere's prior series (London Beginnings), I was curious about what was next in store for us readers. I am pleased to say that Delamere has offered up another great start to what is sure to be an entertaining series. Filled with interesting historical details, entertaining characters, and a message that will long linger on your mind if you'll let it, "Line by Line" is a solid addition to Delamere's repertoire. I award this novel 4 out of 5 stars.
Book has been provided courtesy of Baker Publishing Group and Graf-Martin Communications, Inc.

Jennifer Delamere's (www.jenniferdelamere.com) debut Victorian romance, An Heiress at Heart, was a 2013 RITA Award finalist in the inspirational category. Her follow-up novel, A Lady Most Lovely, received a starred review from Publishers Weekly and the Maggie Award for Excellence from Georgia Romance Writers. Jennifer earned a BA in English from McGill University in Montreal, where she became fluent in French and developed an abiding passion for winter sports. She's been an editor of nonfiction and educational materials for nearly two decades, and lives in North Carolina with her husband.