A worthy read: "Something Worth Doing" by Jane Kirkpatrick 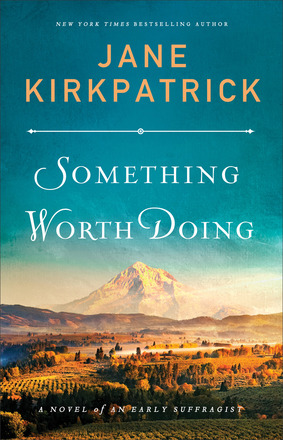 
my review....
Although Jane Kirkpatrick's latest historical novel takes place over a hundred years ago, the novel feels utterly timely as it examines the role of men and women in society and the beliefs that have undermined equality. Kirkpatrick has expertly mined the annals of history surrounding Abigail Scott and her rise from obscurity to a woman who successfully advocated for woman and their right to vote in Ontario (and really, across the country).
Abigail is a richly rendered character who Kirkpatrick has successfully brought to life as a woman who readers will relate to, as Abigail celebrates the wonders of life but also walks through similar hardships we all face surrounding pain and suffering and death. The way she struggles to balance demands of motherhood and career are themes that remain unchanged to this day. As a male reader, however, I couldn't help but wincing at many of the beliefs of the men that are revealed in this book, beliefs that have largely changed for the better but still continue to pervade aspects of society today (as evidenced by the continued presence of domestic violence in all societies worldwide). Abigail's story is one that serves to inspire, as despite facing decades of obstacles, Abigail refuses to give up. She also is forced to examine her priorities in life and what really matters, and she discovers that she doesn't always get it right. In a time when we are globally facing a pandemic that is laying bare continued inequalities, showing the need to continue to battle things like sexism and racism and oppression, Kirkpatrick's book reminds us that the fight may not be over, but that victories small and large need to be celebrated. We have certainly come a long way - and we have still have a long way to go!
"Something Worth Doing" is a solid addition to the fictional repertoire that Kirkpatrick continues to offer to the world, another important story highlighting an admirable character from the past, a story that spurs us on to consider how we can change things to make for a better future. I award this novel a rating of 4 out of 5 stars.
Book has been provided courtesy of Baker Publishing Group and Graf-Martin Communications, Inc.

Jane Kirkpatrick is the New York Times and CBA bestselling and award-winning author of more than 30 books, including One More River to Cross, Everything She Didn't Say, All Together in One Place, A Light in the Wilderness, The Memory Weaver, This Road We Traveled, and A Sweetness to the Soul, which won the prestigious Wrangler Award from the Western Heritage Center. Her works have won the WILLA Literary Award, the Carol Award for Historical Fiction, and the 2016 Will Rogers Gold Medallion Award. Jane divides her time between Central Oregon and California with her husband, Jerry, and Cavalier King Charles Spaniel, Caesar. Learn more at www.jkbooks.com.
Buy now from Amazon.com