Another excellent novel from Angela Hunt: "The Shepherd's Wife" 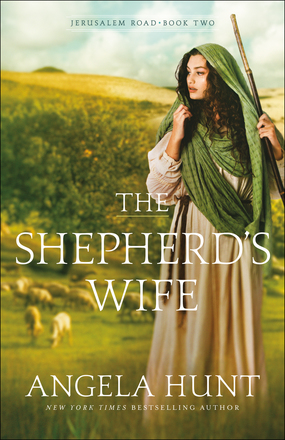 Can she discover the purpose of the life she's been given?

Yeshua of Nazareth has two sisters: Damaris, married to a wealthy merchant's son, and Pheodora, wed to a simple shepherd from Bethlehem. Damaris can't understand why her younger sister settled for such a poor existence, but she does what she can to share her abundance. When her husband is invited to join the Pharisees, she is excited by the opportunity to elevate the family's status, even though some aspects of the lifestyle seem contrary to what she has always been taught.

Pheodora has long felt inadequate compared to her beautiful sister but has no regrets about the life she chose. When Pheodora's husband is unexpectedly thrown into debtors' prison, she is shocked to learn that a loan from her generous sister would jeopardize her brother-in-law's religious aspirations. Forced to pin her hopes on two she-goats whose spotless white offspring could be sold for an upcoming Yom Kippur sacrifice, Pheodora must struggle to keep the animals--and her family--alive.

When horrific reports about Yeshua reach the sisters in Nazareth, Pheodora and Damaris each grapple with their relationships to God, their radical brother, and their own questioning hearts.

The question weaving its way through the course of this story about our purpose in life is explored in a beautiful way in Angela Hunt's latest biblical fiction offering. Showcasing her attention to detail and the in-depth research she's carried out, "The Shepherd's Wife" will transport readers back in time to reveal a "what if?" type of story about another of Jesus' siblings, a story that truly engaged me deeply.

As Pheodora's tale unfolded before me, I felt such a strong sense of injustice at the way she and her family are treated when her husband is thrown into prison with little recourse to securing his freedom. Although I know this novel is just fiction, Hunt succeeds at making it all too real, giving me a real and fresh understanding of why people in the New Testament felt so strongly about tax collectors and those who not only cheated them from their wages but could alter the course of their lives with a single - and unfair - decision. The actions of the Pharisees were likewise horrific to behold. Yet watching Pheodora's brothers gather around her to sustain her and her daughters was a beautiful contrast to their actions, as was the neighbour who ends up going from becoming a possible irritant and foe to a gift of God. Isn't that just so in keeping with the mysterious ways God works in our lives? And though this story is not one of suspense per se, I truly was kept on the edge of my seat because I was just so eager to see how things would work out. As with other tales set in Bible times that Hunt writes, the ending is more true to life than happily ever after. But the story points to what really matters in life and to the amazing work that Jesus did for us all, the way God is able to bring good out of the most difficult of circumstances.

The Shepherd's Wife is another excellent novel from Angela Hunt's fervent imagination, and she has once again given me a fresh appreciation for the Biblical passages upon which this story sprung forth. I award this novel 4.5 out of 5 stars, and I look forward with anticipation to the third novel in the Jerusalem Road series, "A Woman of Words", coming in May 2021!