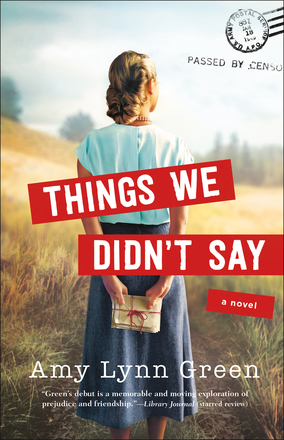 Headstrong and determined, linguistics student Johanna Berglund has very definite plans for her future . . . plans that do not include returning to her hometown and the secrets and heartaches she left behind. But when the only way to her intended future is through undertaking a translator position at a nearby camp for German POWs, she reluctantly accepts.

Johanna arrives to find the once-sleepy Minnesota town exploding with hostility. Most patriotic citizens want nothing to do with German soldiers laboring in their fields, and they're not afraid to criticize those who work at the camp as well. When Johanna describes the trouble to her close friend Peter Ito, a language instructor at a school for military intelligence officers, he encourages her to give the town that rejected her a second chance.

As Johanna interacts with the prisoners and censors their letters home, she begins to see them in a more sympathetic light, but advocating for better treatment makes her enemies in the community. The longer Johanna wages her home-front battle, the more the lines between compassion and treason become blurred--and she must decide where her heart truly lies.
my review....

"Things We Didn't Say" is a debut novel like no other. Not only did I find Amy Lynn Green's novel intriguing, but I have learned something new in the process: the meaning of the word epistolary! I am sure that multiple readers are expressing shock and dismay that I do not casually use this word in my daily conversations, but I fully admit I am uncultured enough to not know that this word refers to a literary work in the form of letters!

Now, I should make a full disclosure here that when I started the novel, I was already convinced that I wasn't going to really enjoy the book, as I've never read an epistolary and assumed it would be rather monotonous to read letter after letter after letter. Boy, was I wrong! The letters fairly breathe with life, and Johanna is one witty character, such that I found that she was downright amusing one moment and thought-provoking the next. Her letters reveal a window into her soul and into her life like nothing I've read before and I simply couldn't get enough as readers are treated to her views on the world, her quirky relationships, and even some mystery along the way! The way the author intersperses Johanna's letters with a variety of different characters keeps the story moving along and will keep readers engaged from start to finish. And those readers who typically gravitate towards historical novels will definitely appreciate the attention to historical detail that has been woven into this tale.

Amy Lynn Green is a welcome addition to the world of Christian fiction, with a unique tale that offers up a clever take on the World War II genre. If there are readers like me who are new to the world of epistolary novels, then I encourage you to give it a try! I award this book a high rating of 4.5 out of 5 stars.

P.S. I hope you are proud of the fact that I have managed to use the word epistolary no less than 3 times in the above review!

P.P.S. If you read this novel, you will see why I've included some P.S.'s in this review - I'm with Johanna - these really are fun!

Amy Lynn Green (www.amygreenbooks.com) is a publicist by day and a freelance writer on nights and weekends. She was the 2014 winner of the Family Fiction short story contest, and her articles have been featured in Crosswalk, Focus on the Family magazines, and other faith-based publications over the past 10 years. This is her first novel.
Buy now from Amazon.com