A satisfying read that even produced tears: My review of "The Dancing Master" by Julie Klassen 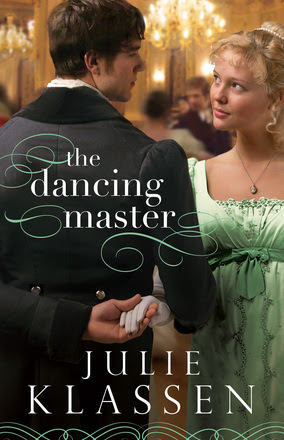 
Finding himself the man of the family, London dancing master Alec Valcourt moves his mother and sister to remote Devonshire, hoping to start over. But he is stunned to learn the village matriarch has prohibited all dancing, for reasons buried deep in her past.

Alec finds an unlikely ally in the matriarch's daughter. Though he's initially wary of Julia Midwinter's reckless flirtation, he comes to realize her bold exterior disguises a vulnerable soul--and hidden sorrows of her own.

Julia is quickly attracted to the handsome dancing master--a man her mother would never approve of--but she cannot imagine why Mr. Valcourt would leave London, or why he evades questions about his past. With Alec's help, can Julia uncover old secrets and restore life to her somber village...and to her mother's tattered heart?

Julie Klassen has a unique ability to infuse her books with wonderful historical details, intriguing plot twists, and well-rounded characters, and "The Dancing Master" has all that and more. Readers will quickly find themselves immersed into 19th century England and experiencing the nuances of that unique period of time and place. I quite enjoyed the story of Alec Valcourt, especially as we learn the truth of why he and his mother and sister had to leave London for the village of Devonshire. His desire to be the man of the family who provides well for them is admirable indeed, and there is much to enjoy about his character. I also found that Klassen did an excellent job of peeling back the layers of secrecy surrounding the character of Julia Midwinter, making for some absolutely absorbing reading! Unfortunately, Klassen's skill at creating believable characters also resulted in me having a vague dislike for Julia herself as she is often self-absorbed and even a tad annoying. By the end of the novel we gain a greater understanding for why she acts the way she does, but even knowing that I never truly grew to care for her as I usually do for Klassen's characters. However, I will say this: the scene involving Julia's mother, Amelia, that takes place in the church, left me with tears in my eyes. The deep forgiveness that occurs in the moments that follow were truly moving, and elevated the entire novel to a whole new level. I closed the book appreciating Klassen's great skill at bringing history and faith and romance to life in a moving story.

Klassen remains one of my favourite authors of historical fiction. "The Dancing Master" is a fine addition to her repertoire, and I award it a solid 4 out of 5 stars.

Julie Klassen loves all things Jane--Jane Eyre and Jane Austen. A graduate of the University of Illinois, Julie worked in publishing for sixteen years and now writes full time. She has won the Christy Award: Historical Romance for The Silent Governess (2010) and The Girl in the Gatehouse (2011) which also won the 2010 Midwest Book Award for Genre Fiction. Julie and her husband have two sons and live in a suburb of St. Paul, Minnesota. For more information, visit www.julieklassen.com