Enthralling in its entirety! "Probing: Cycle Three of the Harbingers Series" by Peretti, Myers, Hunt, and Gansky 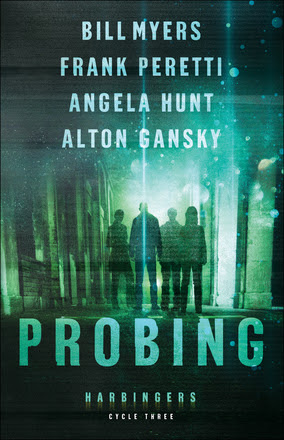 
As Evil Lurks Around Every Corner, This Misfit Team Must Work Together If Anyone Wants to Make It Out Alive. This is Harbingers.

The stakes are higher than ever as Bill Myers, Frank Peretti, Angela Hunt, and Alton Gansky return again to the universe of Harbingers for four more stories set in a world on the brink of destruction.

In Bill Myers's "Leviathan," the team heads to Hollywood for a taping of a new television pilot, Live or Die: The Ultimate Reality. When violence and chaos erupt, they must fight an insidious and multiplying madness before it spreads across the globe.

Frank Peretti's "The Mind Pirates" centers on an earring with mysterious powers that just might hold the key to solving a murder. When two members of the team are kidnapped by seventeenth-century pirates, the team must overcome the ruthless scheming of an evil, hidden nemesis.

In "Hybrids" from Angela Hunt, the arrival of two mysterious black-eyed children and a baby's disappearance are no coincidence. Instead of finding the rest they need, the four friends must stay on their guard as they search for answers--and for a missing child.

In "The Village" from Alton Gansky, a visit to a guarded and secretive North Carolina town becomes the most challenging mystery the team has ever faced as they must jump between universes to solve a problem they barely understand before the window between worlds closes forever.

I don't know how it's possible, but each cycle of the Harbingers seems even better than the one before - and that is saying something! I loved each and every novella that these talented authors added to the book, finding the supernatural events to be utterly intriguing and imaginative. They continue to do an excellent job at creating continuity in the way they depict the members of the team, including Brenda, the professor, Andi, and Tank (not to mention Daniel) such that it is hard to believe that each novella is written by a different author!

Their creativity truly seems to know no bounds, and I would be hard pressed to decide which of these four stories was my favourite. However, if I had to land somewhere it would be the "Hybrids" story that I probably enjoyed the most. There was just something especially creepy about the mysterious black-eyed children and their deathly aura, and Angela Hunt does an admirable job at ratcheting up the suspense in the story. That said, each of the instalments offers an entertaining read and all are very well written. I appreciate that these novellas all tie together, yet at the same time it's also nice to be able to read through one novella and feel like you can put the book down if you need to so you can attend to the real world before coming back for another story.

Readers who have been following the Harbingers stories from the beginning are going to find "Probing" to be another satisfying addition to the series. And if you haven't yet stumbled across the Harbingers, you could probably jump in with this third cycle and figure out enough to enjoy them. But really, why would you want to? Go back and start at the beginning. You will be glad you did! I award Probing a solid 4 out of 5 stars.