Movie Review: "God's Not Dead: A Light in the Darkness" 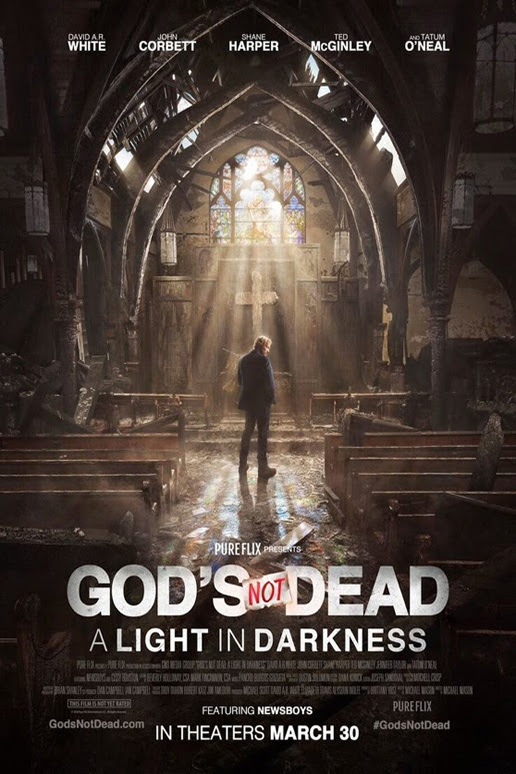 
The Rev. Dave Hill faces an unexpected setback when his beloved church burns down -- prompting the officials at the adjoining university to try and kick his congregation off campus. Battle lines are quickly drawn between the church and the community as the reverend now finds himself at odds with his longtime friend -- the president of the school. Facing a legal battle, Hill soon seeks help from his estranged brother -- a big-city lawyer and atheist -- in a fight to help rebuild the church.


I found "God's Not Dead: A Light in the Darkness" to be a different fare altogether than the first two installments of the series, with a focus on the pastor, Reverend David Hill, and his own crisis of faith rather than primarily following the faith journey of others. The result is a refreshing look at how even those we would least expect to be wrestling with their faith - our pastors - are as human, and therefore as easy to relate to, as everyone else. There are lots of dramatic moments to drive this movie forward, from jail scenes to picketers, crime and burning buildings, and estranged brothers hashing out the root of their falling out. And let's not forget a splash of romance thrown in as well! The result is a movie that will hold your interest with the action and drama until its heart-warming conclusion.

But in the end it wasn't all the action-packed moments that truly held me in their grip. It was David's transformation over the course of the movie, and the love and grace that spills out from him as a result. There were scenes that brought tears to my eyes,  Movie watchers will be reminded that there is more to life than being right. As Christians, we may have the truth at our back. But if that truth isn't accompanied by grace, then no one will be willing to listen. David lives that out in a way that makes for some compelling movie watching indeed!

I recommend this movie for viewers looking for a movie that will both entertain and challenge them in their walk with God, and perhaps even offer comfort as they walk through their own difficult moments in life.