An exceptional debut novel: "We Hope for Better Things" by Erin Bartels 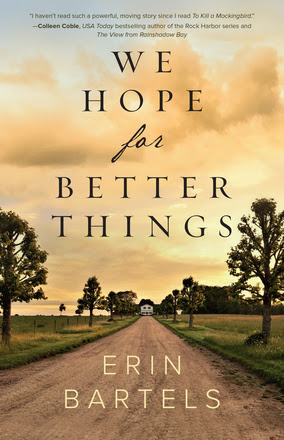 The past is never as past as we'd like to think


When journalist Elizabeth Balsam is asked to deliver a box of old photos to a relative she didn't know she had, the strange request seems like it isn't worth her time. But as she explores her great-aunt's farmhouse with its locked doors and hidden graves, she soon discovers just how dramatically some of the most newsworthy events of the previous two centuries shaped her own family. As she searches for answers to the riddles around her, the remarkable stories of two women who lived in this very house emerge as testaments to love, resilience, and courage in the face of war, racism, and misunderstanding.

Take an emotional journey through time--from the volatile streets of 1960s Detroit to Michigan's Underground Railroad during the Civil War--to uncover the past, confront the seeds of hatred, and discover where love goes to hide.


Weaving the lives of three women into a spell-binding tale, "We Hope for Better Things" is the type of story that will long linger on your mind. It is one of those novels that will find you judging the actions of the characters depicted, while at the same time having you shifting uncomfortably in your seat when you recognize pieces of yourselves in the things they say and do. It is one of those books where you come to the final page and simply have to sit for a few minutes and allow yourself to feel all the different emotions that have been stirred up.

Erin Bartels sifts through layers of history to expose the evils of racism in all its forms, along with efforts to live out the truths of equality, even when the characters don't quite get it right. Although I don't always appreciate stories that shift back and forth between present and past, Bartels does so in a way that feels absolutely natural, moving the story forward and keeping me engaged from the very beginning to the end. Bartels' novel is not for those wanting a quick escape into a light-hearted book, but it is definitely meant for someone looking for a good story, the kind that will touch your soul and leave you changed. You will be able to celebrate the goodness that lies within human capacity, while grieving all that we get wrong at the same time. Bartels shows us that forgiveness isn't easy, that even when people want to forgive that it often looks messy and doesn't come without a cost. But in the midst of those trials and aches and pains she shows God's hand at work as well, shaping and moulding and guiding and loving us in unseen ways. "We Hope for Better Things" is a bittersweet novel where joy battles with pain, and where love ultimately triumphs.

Erin Bartels has crafted an exceptional debut novel, one that will plumb the depths of your emotions and leave you profoundly moved. I award this novel a rating of 4.5 out of 5 stars.

Erin Bartels has been a publishing professional for more than 15 years. Her short story "This Elegant Ruin" was a finalist in The Saturday Evening Post 2014 Great American Fiction Contest. A freelance writer and editor, she is a member of Capital City Writers and the Women's Fiction Writers Association and is former features editor of WFWA's Write On! magazine. She lives in Lansing, Michigan, with her husband, Zachary, and their son, Calvin, and can be found online at www.erinbartels.com. We Hope for Better Things is her first novel.