A whole lot of fun! "The Unexpected Champion" by Mary Connealy 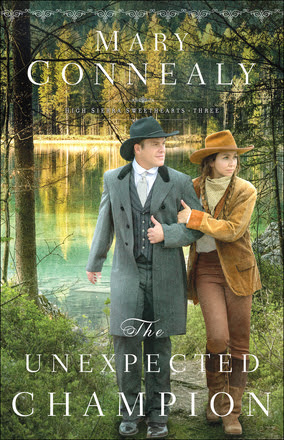 
They're as Different as Could Be.

But They'll Need to Trust Each Other to Survive


the Wilderness . . . and the Dangers Chasing Them.

City dweller John McCall never expected to be out in the High Sierras of 1868 on a wild-goose chase to find the Chiltons' supposedly lost grandson. But now that he's out here, things have gotten even more complicated, mostly due to wildcat Penny Scott. She's not like any woman he's ever met--comfortable in the woods, with a horse, and with a gun.

When Penny and John are taken against their will by a shadowy figure looking for evidence they don't have, both realize they've stumbled into something dangerous. With their friends and family desperately searching for them, Penny and John must make a daring escape.

When they emerge back into the real world, they discover their kidnapper just won't stop. This city man and country woman must bring a powerful, ruthless man to justice, all while fighting a very inconvenient attraction to each other.

The third and final novel in the "High Sierra Sweethearts" series is, quite simply, a whole lot fun! Though it is certainly jam packed full of action and has moments of suspense that I quite enjoyed, it was the light-hearted undertone of the book and the playful banter between Penny and John that truly served to keep me glued to the pages! Penny is not a woman that you would want to cross, as her independence and her mad trailblazer skills make her quite the force to be reckoned with. But John has skills in his own right, and I enjoyed watching each of these characters grow in their appreciation for each other and what they had to offer. And as that appreciation grew into something more and their attraction grew, I couldn't help but smile at the unlikely pair that these two make as a wild mountain woman and city slicker aren't the most likely of couples!

"The Unexpected Champion" is entertaining from start to finish as Penny and John hunt down the villain and find themselves in one daring escapade after another. But I also was glad to see that us readers could reconnect with the prior characters who starred earlier books in the series, allowing us to see things come full circle and justice to finally be realized for them all. I came to the final pages of this novel feeling a sense of satisfaction in finishing not only this book but the whole series, one of my favourite series from Mary Connealy so far.

I award this novel a solid rating of 4 out of 5 stars, and I absolutely look forward to what lies in store next for those of us who count themselves as Connealy fans. If that is not yet you, then for goodness sakes get a hold of this book and the prior books in the series! Definitely time well spent.