A great addition to the series: "A Bride of Convenience" by Jody Hedlund 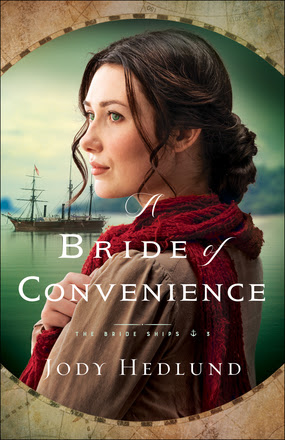 After Heartbreaking Loss,
a Marriage of Convenience Holds More Appeal than Ever Before.
There is nothing left to keep Zoe Hart in England. Unemployed and struggling with grief, she decides to leave her bleak life behind her and emigrate on a bride ship to British Columbia--the place her brother fled to when falsely accused of a drastic crime.
Pastor to miners in the mountains, Abe Merivale discovers an abandoned native baby during a routine visit to Victoria and joins efforts with Zoe--one of the newly arrived bride-ship women--to care for the orphan. When Abe is forced to choose between following the strict rules laid down by his bishop and listening to God's nudges to care for his people, he is left at a crossroads.
Determined to find her brother and to give the baby a home, Zoe rashly accepts a marriage proposal from a man who promises both. But Abe knows the man's unsavory reputation. Intent on protecting Zoe and wounded by his own failed engagement, Abe impulsively offers his own hand instead. They hastily marry, but both soon realize the marriage of convenience they imagined is not so convenient after all.

Reading a novel centered in my own backyard (or a half hour car ride away, at least) is an absolute pleasure when it also features excellent characters who cause you to love them ever more with each chapter! Living near Yale myself, where this novel takes place, I can attest that Hedlund has done a great job at capturing the location and the history in a realistic way - and even I developed a fresh appreciation for this corner of the world that I happen to call home.
Zoe Hart is one of those spunky women who isn't afraid to speak her mind, but who also has a soft heart that puts her own needs aside to care for orphans and widows in a way that truly inspires. That quality makes her the perfect helpmate for pastor Abe, even if she isn't in the same social station and is therefore deemed less than worthy by the Bishop who oversees him. Abe's disagreements with the Bishop about how to minister to the people is a bit sobering, as I am always saddened to consider how man-made rules can get in the way of true ministering to the poor or marginalized people or whoever God has brought into our lives. Watching both Abe and Zoe grow over the course of this story brought a smile to my face. Although I sometimes felt impatient for things to progress to where us readers were wanting things to go in their relationship, the ride to get there was quite entertaining to say the least. Several scenes had me laughing out loud, probably because I recognized myself in some of those moments of Abe's clumsiness. I think that's one reason I so often enjoy Hedlund's books, because she does such a good job of capturing our humanity, whether those lighthearted moments we can stumble into, or those darker struggles we find ourselves in where God's light breaks through.
"The Bride Ships" series has been a solid addition to Hedlund's repertoire so far, and I will admit to having a soft spot in my heart for these books in part because they've taken place in the British Columbia where I've been raised and I so love.  Like the prior two books, "A Bride of Convenience" offers readers compelling characters along with plenty of drama to capture your interest and a real portrayal of God's grace. I quite enjoyed this novel and award it 4 out of 5 stars.
Book has been provided courtesy of Baker Publishing Group and Graf-Martin Communications, Inc.