Review & GIVEAWAY of "This Scarlet Cord": The Love Story of Rahab by Joan Wolf

Joan Wolf's latest novel brings to life the amazing story of Rahab, as inspired by the Biblical account documented in the book of Joshua, chapters 2 and 6. In This Scarlet Cord, Rahab is the youngest daughter of a Canaanite farmer, a young woman of extraordinary beauty who her family believes is destined for more than the life of a simple farmer's wife. Rahab and her family thus travel to Jericho in the hopes of catching the eye of nobility and securing an advantageous marriage. However, while they are there, Rahab draws the eyes of the King and becomes part of a plan to ensure the King's successful participation in the fertility rites set to occur in honor of the gods Baal and Asherah. In desperation, Rahab calls upon Elohim, the God of the Israelites whom Rahab was introduced to many years prior when she was rescued by Sala, the son of an Israelite merchant. Rahab's prayers are answered in a manner she never could have anticipated when she becomes reconnected with Sala and becomes part of God's plans to destroy Jericho and restore the land of Canaan to the people of Israel.

I greatly enjoyed This Scarlet Cord, from the fascinating historical details woven into the story, to the courageous and lively character of Rahab and the forbidden love that develops between Sala and Rahab. After finishing the story, I went back to again read the account of Rahab in the Bible, and it is amazing how Joan Wolf has created such an entertaining story from so few sentences in the Bible! It is clear she has done her research into the setting of that time period, including the religious rituals observed by the Canaanites at that time, rituals that find Rahab in a frightening position indeed! The characters are very well-developed, and the story contains plenty of action to keep the story moving along well. Although Wolf has placed her own spin upon the story, she is absolutely faithful to the spirit of the Biblical account, providing an uplifting account of God's love and miraculous power. Reading this story has caused me to consider for the first time what it must have been like for the Canaanites living in Jericho to experience the Israelite army marching around their city for 7 days, the fear they must have felt! I also had never really wondered how it is that Rahab came to believe in God, as is so clearly noted in the Bible, and the author has created a plausible explanation of this in  a manner that not only makes sense but provides an absorbing read at the same time. I leave this book more in awe than ever of the power of God to carry out His plans, but also even more appreciative of the character of Rahab and her role in the genealogy of Jesus. What an amazing story of faith!

I highly recommend this book and award it 4.5 out of 5 stars.

Book has been provided courtesy of the publisher, Thomas Nelson, for the purposes of this unbiased review. 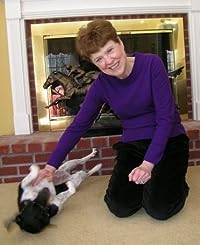 Joan Wolf is a USA TODAY bestselling American writer, whose acclaimed Regency romances have earned her national recognition as a master of the genre. Her many historical and contemporary romances, some of which have been chosen as Literary Guild selections, have been highly praised by reviewers and authors alike.

Joan was born in 1951 and she grew up in the Bronx, New York. A former English teacher, she obtained a Bachelor's degree in Mercy College and Master in English and Comparative Literature at Hunter College. An avid rider and horse owner, Joan lives in Connecticut with her husband Joe and two grown children, Jay and Pam.


I am giving away 1 copy of "This Scarlet Cord" to readers from the U.S. and Canada, courtesy of the publisher, Thomas Nelson!

You can get 1 entry into the giveaway for each task you perform:

2. "Like" my Facebook page, and let me know you did so in a comment. (The link is at the top of the webpage). Let me know if you've already liked it, and I'll give you an entry.

4. Leave a comment answering the following question: "What is your favourite biblical fiction book you've ever read?"

++ Please include your email address in your comment so I can contact you to arrange to get the book in the mail to you.