A deftly woven novel that will cost you sleep: My review of "Snapshot" by Lis Wiehl @DailyVineCA 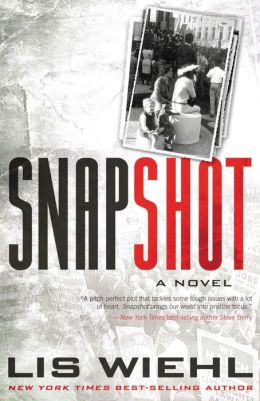 
TWO LITTLE GIRLS, FROZEN IN BLACK AND WHITE. ONE PICTURE WORTH KILLING FOR.

The Civil Rights Movement is less than a distant memory to Lisa Waldren—it is someone else’s memory altogether, passed on to her through the pages of history. Her life as a federal prosecutor in Boston feels utterly remote from the marches in the South that changed her father’s generation—and the entire nation—forever.

But the truth is, she was there.

When a photograph surfaces showing a blond, four-year-old Lisa playing with an African-American girl at   civil rights march in Fort Worth, Lisa is faced with a jarring revelation: the girls may have been the only witnesses who observed the real killer of civil rights leader Benjamin Gray . . . and therefore the only ones who can exonerate the death row inmate falsely accused of the murder.

Soon, Lisa finds herself in the dangerous world her father had shielded her from as a child. After some searching, the Waldrens find the other little girl from the photo and, in the process, uncover conspiracy mere steps away from the likes of Bobby Kennedy, Lyndon Johnson, and J. Edgar Hoover.

Based on real events and a photograph snapped by author Lis Wiehl’s own G-man father, Snapshot is a remarkably original marriage of mystery and history.

"Snapshot" is utterly fascinating, from beginning to end, made all the more so by the knowledge that the book was inspired by real events and an actual photograph of Lis Wiehl. I greatly enjoyed the twists and turns present in the plot, as murder and conspiracy collide. Wiehl does an excellent job at unveiling the plot through Lisa's efforts to help her father, and the redemption of their relationship is equally as fascinating as the suspenseful scenes. The combination of actual history into the story makes it seem utterly plausible, and Wiehl provides a unique take on the civil justice movement. Lis Wiehl is not only proving to be a master of suspense, but in "Snapshot" also explores deeper themes of racism and gender stereotypes. Some of the scenes are heart-stirring, while others will leave your pulse racing, but no matter what the book will definitely entertain you! You will grow to care about the various characters and the unjust situations they encounter, all while hoping they can make it out alive.

As you can see, Snapshot is a wonderful addition to Wiehl's ever-growing repertoire, and I can't wait to see what is coming next from this talented author!


Find out more about the book on the publisher website:   http://www.thomasnelson.com/snapshot.html