A fine follow-up: "A Powerful Secret" (Book 2 of the Worthington Destiny Series) by Leman & Nesbit 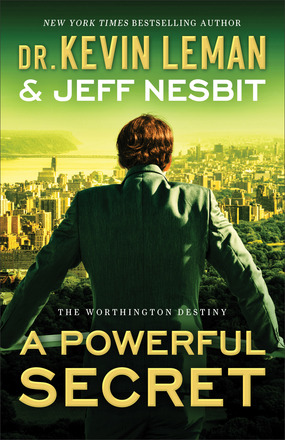 Sean has always felt like an outsider in his own family.Now he must risk never achieving what he wants most--his father's love.

Billionaire globe-trotter Sean Worthington is stunned when his older brother suddenly abandons the Senate race in New York and walks away without a backward glance. As campaign manager, Sean's left to handle the media feeding frenzy with no answers. Worse, their father--as usual--backs Will, the "perfect" son.
Frustrated by his father's lack of belief in him, Sean determines to finally move on and forge a unique path. But when a powerful secret is revealed, threatening everything Sean has counted on, he must wrestle with shocking truths . . . and combat the power brokers behind the scenes who have the Worthington family in their crosshairs.

The second novel in The Worthington Destiny is a fine follow-up to the first book in the series, "A Perfect Ambition". The same primary cast of characters returns in "A Powerful Secret", but with the primary focus this time being on Sean, the second (and middle) child in the family. Once again, the authors take the concepts of the Birth Order and flesh out how this could manifest itself in the intriguing (and wealthy) Worthington family. I quite enjoyed how the family's story was fleshed out further in this novel, as Sean encounters the life-changing secret his mother had been keeping from him his whole life. I can't imagine how earth-shattering learning something like that would be, and yet the authors do a good job of not allowing Sean to be bogged down in his grief, but instead allow him to move through it and emerge all the stronger on the other side. I do have to say that I did not find this novel to move along as fast as the first novel in the series did, and so it did not hold my interest quite the same way the first did. It may be that I didn't get the same feeling of suspense that I did in the first novel with the bombing that took place. However, as far as contemporary fiction goes, this novel has plenty of dramatic and unexpected moments that are sure to maintain readers' interest in the characters lives. Leman and Nesbit make a strong writing team, and the novel has been well-crafted.

I urge those readers who are looking for a solid fiction book that will both provide entertainment while offering new insights on birth order to grab a copy of "A Powerful Secret". I, for one, am looking forward to how things conclude in the third book of the series, A Primary Decision, which is being released Fall 2016!

Dr. Kevin Leman is an internationally known psychologist, radio and television personality, and speaker who has taught and entertained audiences worldwide with his wit and commonsense psychology. A bestselling and award-winning author, Dr. Leman has written more than 50 books about marriage and family issues, including The Birth Order Book, Sheet Music, Making Children Mind without Losing Yours, and Have a New Kid by Friday. He is coauthor, with his son Kevin Leman II, of a series of illustrated children's books for each child in the family. He is also featured on 6 video series on marriage, parenting, blended families, and single parenting.

Jeff Nesbit is a former communications director to the vice president at the White House, served as the director of public affairs for two prominent federal science agencies, and has been a national journalist with Knight Ridder Newspapers. He is the author of 20 novels. Cocreator of the Emmy award-winning Science of the Olympic Winter Games and the Science of NFL Football video series with NBC Sports, Jeff is executive director for Climate Nexus and writes "At the Edge," a weekly science column for U.S. News & World Report.