A unique historical novel: "From This Moment" by Elizabeth Camden 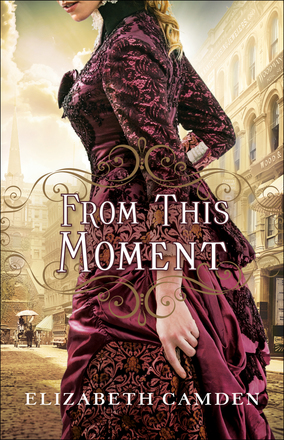 
Stella West's artistic talent made her the toast of London, but when her beloved sister dies under mysterious circumstances she abandons everything and heads for Boston. With single-minded determination she fights to pierce the ring of secrecy surrounding her sister's death. Upon meeting Romulus White, a publisher with connections into every important power circle in the city, she quickly realizes he could be a valuable ally in navigating Boston society.
Romulus has been pursuing Stella for years to create art for his magazine. Her luminous illustrations are the missing piece he needs to propel his magazine to the forefront of the industry, and he will stop at nothing to get her on board.
Sparks fly the instant they join forces, but Romulus is unsettled by the unwelcome attraction he feels toward Stella, fearing she might be the one woman who could disrupt his hard-won independence. He may have finally met his match in Stella, but is helping her solve the mystery of her sister's death worth the risk to his publishing empire?

Elizabeth Camden once again offers up another unique historical read in her latest book "From This Moment". Artist Stella West and publisher Romulus White are each strong characters whose personalities sizzle upon contact. The result is often witty repertoire between the two of them as they dance around their feelings for each other in the midst of their own driving goals. Sometimes authors can overdo it when characters are each fighting their attraction for each other as this element of this story can become over the top, but that is not the case here. I thought the romance progresses well and in a believable manner. I also enjoyed the historical research that shines through this story as Camden succeeds at bringing the Boston of 1897 to life with an interesting focus on the establishment of the very first underground subway in America. This element intersects well with the murder mystery that drives the story forward, creating an interesting overall plot. The only part of the story that lowered my enjoyment is that Stella's character simply comes across as too headstrong at times as her own needs often railroad over what Romulus is experiencing, casting her in quite a selfish and, sad to say, unlikable light. However, the final chapters reveal a side of Stella that I quite liked - and I won't say more as I don't want to give the ending away!

"From This Moment" offers up lots of surprising moments that will keep you glued to the pages, set in a historical setting that I very much enjoyed. Although this isn't my favourite Elizabeth Camden novel, I still thought it was a solid addition to her repertoire and award it 4 out of 5 stars.
Book has been provided courtesy of Baker Publishing Group and Graf-Martin Communications, Inc. Available at your favourite bookseller from Bethany House, a division of Baker Publishing Group.

Elizabeth Camden is the author of eight historical novels and has been honored with a RITA Award, Christy Award, and Daphne du Maurier Award. With a master's in history and a master's in library science, she is a research librarian by day and scribbles away on her next novel by night. She lives with her husband in Florida. Learn more at www.elizabethcamden.com.