Mesmerizing: "Shelter of the Most High (Cities of Refuge Book #2)" by Connilyn Cossette 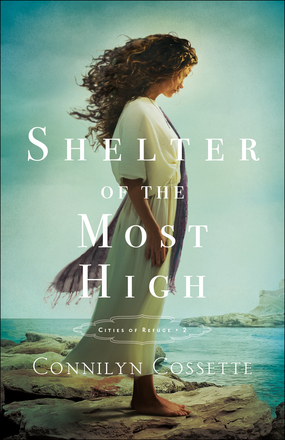 The daughter of a pagan high priest, Sofea finds solace from her troubles in the freedom of the ocean. But when marauders attack her village on the island of Sicily, she and her cousin are taken across the sea to the shores of Canaan.

Eitan has lived in Kedesh, a city of refuge, for the last eleven years, haunted by a tragedy in his childhood, yet chafing at the boundaries placed on him. He is immediately captivated by Sofea, but revealing his most guarded secret could mean drawing her into the danger of his past.

As threats from outside the walls loom and traitors are uncovered within, Sofea and Eitan are plunged into the midst of a murder plot. Can they uncover the betrayal in time to save their lives and the lives of those they love?

Connilyn Cossette's latest novel is a lush, richly drawn tale that once again proves why she has quickly become one of my favourite authors of Biblical fiction. I would dare anyone to read this tale and ever declare that fiction that takes place in Bible times is boring, a refrain I've heard from others time and again, because this book is thoroughly entertaining!

"Shelter of the Most High" once again takes place in Kedesh, a city of refuge, and reunites us with characters we first grew to love in the first novel in this series, "A Light on the Hill". But the main character in this novel, Sofea, is who really steals the show (as she should!) as she survives the journey of being captured from the island of Sicily and finds herself encountering the people of God and their mysterious ways. I was mesmerized by Sofea's tale and watching her meet the mercy of a living God, especially how this was contrasted with her own childhood of fear and witnessing pagan rituals such as child sacrifice. The plot is well-paced, with oodles of adventure to keep you hooked from chapter to chapter. And in the midst of the suspense and secrets and betrayal blooms a love that grows so naturally between Sofea and Eitan that you can't help but root for them to overcome the odds and face life together. As to whether they do or not, you'll have to grab a copy for yourself to find out!

This second novel in the Cities of Refuge series is another satisfying tale that will leave you eager for the third and final novel in the series which is set to arrive in Spring 2019. I strongly recommend "Shelter of the Most High", and award it 4.5 out of 5 stars.

When she is not homeschooling her two sweet kids (with a full pot of coffee at hand), bestselling author Connilyn Cossette is scribbling notes on spare paper, mumbling about her imaginary friends, and reading obscure, out-of-print history books. There is nothing she likes better than digging into the rich, ancient world of the Bible and uncovering buried gems of grace that point toward Jesus. Her novel Counted With the Stars won the 2013 Frasier Contest and was a semifinalist in the 2013 ACFW Genesis Contest. Although a Pacific Northwest native, she now lives near Dallas, Texas. Connect with her at www.connilyncossette.com.