Made me cry AGAIN: "The Sky Above Us" by Sarah Sundin 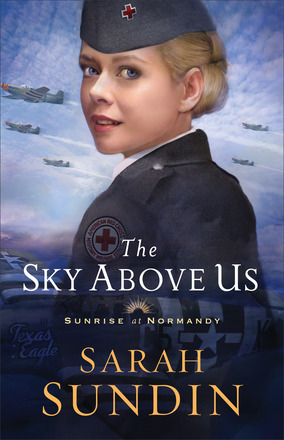 Facing the past may be the most fearsome battle of his life.


Numbed by grief and harboring shameful secrets, Lt. Adler Paxton ships to England with the US 357th Fighter Group in 1943. Determined to become an ace pilot, Adler battles the German Luftwaffe in treacherous dogfights in the skies over France as the Allies struggle for control of the air before the D-day invasion.

Violet Lindstrom wants to be a missionary, but for now she serves in the American Red Cross, arranging entertainment for the men of the 357th and setting up programs for local children. Drawn to the mysterious Adler, she enlists his help with her work and urges him to reconnect with his family after a long estrangement.

Despite himself, Adler finds his defenses crumbling when it comes to Violet. But D-day draws near . . . and secrets can't stay buried forever.


Keep this on the down-low, but once again Sarah Sundin brought me to tears with her latest historical fiction novel, "The Sky Above Us". Featuring the second brother in the Paxton family, Adler, along with the spunky Violet Lindstrom, Sundin's second novel in the series is every bit as good as the first one. As per usual, Sundin's historical research shines throughout the novel, adding a sense of realism to what the characters are facing. Both Violet and Adler experience such tremendous growth over the course of the story, I couldn't help but feel proud of them (and yes, I do realize they are simply characters, but you will see what I mean). In terms of the tears, it was Adler's experience of struggling with the horrible mistakes in his past, along with Violet's realization of her own sinful nature and the way she interacted with Adler, that just left me feeling incredibly moved. I won't spoil the story by saying more, but let me encourage you to keep some facial tissue nearby just in case you are feeling as tender-hearted as I was as you read through the novel. In the midst of the moving scenes, Sundin has woven in plenty of action, an element of mystery, and of course some good old-fashioned romance to add a sweet note to the tale.

I want to add that Sundin does a great job at setting things up for the third and final book in the series. She leaves us readers wondering what on earth has happened to the third brother in Adler's family, who really seemed to get the worst deal out of them all. I honestly can't wait to see where Sundin is going to take his story! As for "The Sky Above Us", I greatly enjoyed this wonderful second addition to the series, and I award it a solid 4 out of 5 stars.

Sarah Sundin is the author of The Sea Before Us, as well as the Waves of Freedom, Wings of the Nightingale, and Wings of Glory series. Her novels have received starred reviews from Booklist and Library Journal. Her popular Through Waters Deep was a Carol Award finalist, and both Through Waters Deep and When Tides Turn were named on Booklist's "101 Best Romance Novels of the Last 10 Years." Sarah lives in Northern California, where she works on-call as a hospital pharmacist. Visit www.sarahsundin.com for more information.