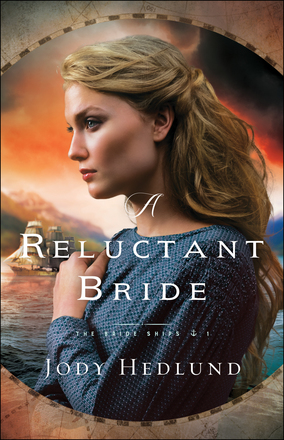 A New Life Awaits Her across the Horizon

Living in London's poorest slum, Mercy Wilkins harbors little hope for a better life. So when she's offered the opportunity to join a bride ship sailing to British Columbia, she agrees. The journey abroad is her only prospect to escape a bleak future--both for herself and to help her sister, who's suffering in a workhouse.

Wealthy and titled Joseph Colville leaves everything behind and takes to the sea to escape the pain of losing his family. As the ship's surgeon, he's in charge of the passengers' welfare aboard the Tynemouth, including sixty brides-to-be. He has no immediate intention of settling down, but when Mercy becomes his assistant, the two must fight against a forbidden love.

With hundreds of single men congregating along the shore of Vancouver Island, eager to claim a bride from the Tynemouth, will Mercy and Joseph miss their chance at true love, or will they overcome the obstacles that threaten to keep them apart?

Get ready to be thoroughly swept up into the latest fascinating story from Jody Hedlund with her first book in The Bride Ships series, "A Reluctant Bride"! Set in the 1860's, Hedlund has captured an intriguing time in history with her story, making the past come alive with great skill, whether that be the slums of London, England or the shores of Vancouver Island in British Columbia (B.C.). As someone who lives close to the coast of B.C. myself, I was extra eager to grab a copy of this book from Jody Hedlund, and I can attest that she does a fine job of representing this great land I call home.

Now, most of this first book of the series does take place first in England and then on the sea, and Hedlund has made her scenes so realistic that there were moments that I almost felt as seasick as the poor people shoved on this ship for weeks on end! These different settings provide a great backdrop for the story of Mercy, who is rescued from the horrific slums of London, and Joseph, who comes from great wealth but is determined to use his gifts as a doctor. I greatly enjoyed their story line and the way they overcome societal conventions to discover what may be possible. Though I am not a seeker of romance myself, the females in my family who read this book informed me that female readers will be fanning themselves across North America as Mercy and Joseph fall ever closer towards love. The ending in particular will please readers of all types, and Hedlund nicely sets the stage for the next novel in the series.

"A Reluctant Bride" is a great start to "The Bride Ships" series. My daughter finished the book and then declared how glad she is that women aren't sent on ships across the sea anymore and forced to marry. I couldn't agree more! But it surely makes for entertaining reading in any case. I award this novel a solid 4 out of 5 stars.

Jody Hedlund (www.jodyhedlund.com) is the author of over 20 novels, including Love Unexpected, Captured by Love, Unending Devotion, The Preacher's Bride, and A Noble Groom, and is the winner of numerous awards, including the Christy, Carol, and Christian Book Award. She received a bachelor's degree from Taylor University and a master's from the University of Wisconsin, both in social work. She lives in Michigan with her husband and five children. She loves hearing from readers on Facebook and on her blog.