Simply Mesmerizing: "Whose Waves These Are" by Amanda Dykes 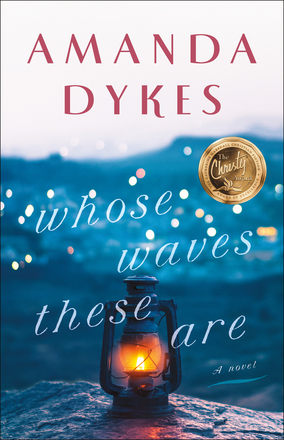 
In the wake of WWII, a grieving fisherman submits a poem to a local newspaper: a rallying cry for hope, purpose . . . and rocks. Its message? Send me a rock for the person you lost, and I will build something life-giving. When the poem spreads farther than he ever intended, Robert Bliss's humble words change the tide of a nation. Boxes of rocks inundate the harbor village on the coast of Maine, and he sets his callused hands to work.

Decades later, Annie Bliss is summoned back to Ansel-by-the-Sea when GrandBob, the man who gave her refuge during the hardest summer of her youth, is the one in need of help. But what greets her is a mystery: a wall of heavy boxes hiding in his home. Memories of stone ruins on a nearby island ignite a fire in her anthropologist soul to uncover answers.

Together with the handsome and enigmatic town postman, Annie uncovers the story layer by layer, yearning to resurrect the hope GrandBob once held so dear and to know the truth behind the chasm in her family's past. But mending what has been broken for so long may require more of her and those she loves than they are prepared to give.

There is no other way to describe the debut novel from Amanda Dykes than to say that it is, quite simply, mesmerizing. Although I was certainly intrigued by the description of the novel from the back cover, I was not prepared to encounter a novel so richly rendered, with characters who I connected with on such a deep level. As Dykes introduced me to Robert and Annie and Jeremiah and all the different characters from Ansel-by-the-Sea, I felt like I was there living the story by their side, wrestling with the good, the bad and the tragic just as they did, and finding a wonderful grace in the midst of the pain. The amazing part is that it's not just one character who shines, but a whole community of brave souls who work for the good of all, with a few mistakes made along the way. The romance that develops between different characters is that of the best kind, real and alive and there despite the flaws that are holding people back. And as such, this is the kind of story that will appeal to every kind of reader, really to anyone who just is looking to pick up a well-written novel that will inspire.

"Whose Waves These Are" is beautifully written, capturing the flavour of different eras with ease, and teasing out a tale that will long linger on my mind. It's hard to believe that this novel is Dykes' debut offering, as I felt like I was reading a book by a seasoned author. As such, she has now joined my list of "must read" authors! And, I cannot help but award this book a full 5 out of 5 stars. If you haven't yet experienced this novel, make sure you hurry out and get a copy! You will be glad you did.

Amanda Dykes (www.amandadykes.com) is a drinker of tea, dweller of redemption, and spinner of hope-filled tales who spends most days chasing wonder and words with her family. Give her a rainy day, a candle to read by, an obscure corner of history to dig in, and she'll be happy for hours. She's a former English teacher, and her novella, Bespoke: A Tiny Christmas Tale, was met with critical acclaim from Publishers Weekly, Readers' Favorite, and more. She is also the author of a novella in The Message in a Bottle Romance Collection. Whose Waves These Are is her debut novel.