Even better than the first! "The Way of Love" by Tracie Peterson 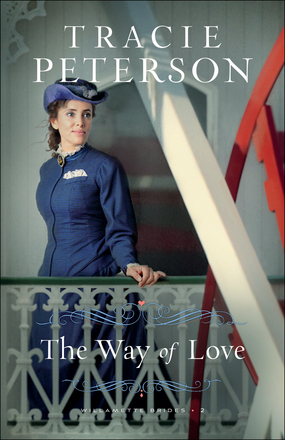 
Newly arrived in Portland to finish her studies as a doctor at Willamette University's medical college, thirty-year-old Faith Kenner is glad to be near family again at her cousin Nancy's boardinghouse. But the proximity is bittersweet, stirring up the desire for a family of her own--a longing that the secrets she harbors will never permit.

When she stumbles onto handsome riverboat captain Andrew Gratton, who has been injured defending a Native working on his ship, she surprises him by expertly tending his wound and praising his conviction. A fast friendship forms, but Faith is careful to quell her hopes for something more.

Instead, she joins her fellow students in putting together lectures to speak out against Oregon's racist laws and policies--actions that garner the dangerous attention of powerful men who have other plans for their state. Soon Faith is caught in the middle of a plot to push the local Indian tribes to rebel, and her family is threatened. Will the harm these men intend be her undoing, or is it simply the mysterious path God has her on to bring the truth--and her heart's desires--to light?


It is rare for me to read the second book in a series and immediately think to myself that it was even better than the first, but such was the case with "The Way of Love"!  Faith is one of those strong characters who is just utterly certain of her place in the world and the gifts God has given her, and in a world that often seems so chaotic, it was simply refreshing to watch her live up to her name and stand firm in her beliefs. Her story of growing up with missionary parents to the Native peoples and learning the healing arts from a young age made for some fascinating reading, as did her sense of justice for those who are oppressed.

As Faith finds herself caught up in the snares of dangerous men who are determined to bring harm to those she cares about, you can just feel the sense of peril building up in the story. Though there are plenty of places when Peterson takes the time to allow her characters to breathe and to grow over the course of the story, there is also plenty of danger that kept me whipping through the pages at the same time. Peterson also adds in a remarkable friendship between Faith and Andrew, a Riverboat captain who hides a surprising secret about his past much like Faith does. Watching them grow to care about each other felt so completely natural, and you can't help but cheer them on as their relationship deepens and grows into something more.

The second novel in the Willamette Brides is an utterly enjoyable novel, with completely lovable characters, and a journey through history that is sobering indeed. But the racism depicted in these pages makes the love these characters display, to those close to them and to all people in general, shine all the brighter. I award this novel a solid 4 out of 5 stars.

Tracie Peterson (www.traciepeterson.com) is the award-winning author of over 100 novels, both historical and contemporary. Her avid research resonates in her many bestselling series. Tracie and her family make their home in Montana. Visit www.traciepeterson.com to learn more.