Superb Conclusion: "Like Flames in the Night" by Connilyn Cossette 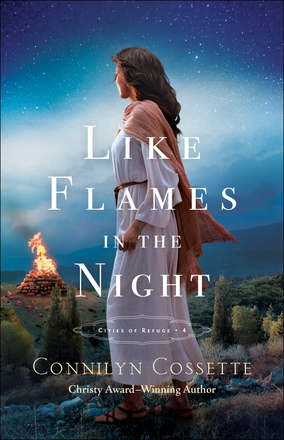 
Strong-willed Tirzah wants to join her people in driving the enemy from the land of Israel and undergoes training for a secret mission inside the stronghold of Shechem. But soon after she has infiltrated the ruthless Aramean commander's kitchen, she makes a reckless decision that puts her and her allies in grave danger.

Fresh off the battlefield, Liyam returns home to discover his beloved daughter is dead. After his vow to hunt down her killer leads to months of fruitless pursuit, his last hope is in a family connection that comes with strings attached--strings that force him to pose as a mercenary and rescue an infuriating woman who refuses to leave her mission uncompleted.

When an opportunity to pave a path to a Hebrew victory arises, can Tirzah convince Liyam to fight alongside her in the refuge city of her birth? Or will Liyam's thirst for vengeance outweigh his duty to his people, his God, and the woman he's come to love?


Connilyn Cossette has crafted a superb conclusion to the "Cities of Refuge" series, once again drawing readers back in time to the era of the Biblical judges, a time when the people of Israel had, in general, given up hope that they would ever get their land back from the Arameans. In the midst of the uncertainty, Cossette's characters shine brightly, particularly Tirzah with her mix of courage and wisdom that breathes hope wherever she goes. Those readers who love reading books where the heroine colours outside the lines of societal expectations will especially love Tirzah, as she trains with the male warriors and becomes a force to be reckoned with her in her own right. The combination of Liyam and Tirzah makes for a thoroughly entertaining story as they join forces to sneak into enemy territory and spy for the Hebrew forces. And the love that kindles between them grows into something that is more than just romance, rather placing on display the power of God to heal and provide freedom in unexpected ways.

Cossette's novel is not just one that will thoroughly satisfy any reader looking for a great story to draw them away from reality for a few stolen moments. It also brings God's truths to light in powerful ways, a reminder to place our faith - and our future - firmly in God's hands. With the chaos of the world around us, this is a novel that we all need to read! Cossette has woven some beautiful spiritual themes throughout this novel, and indeed the whole series, from beginning to end.

I greatly enjoyed this final book in the Cities of Refuge series, and award it a full 5 out of 5 stars. Cossette continues to show why she is so deserving of the awards that have been granted to her! I am looking forward to her next novel coming in December 2020.

Connilyn Cossette (www.connilyncossette.com) is a Christy Award and Carol Award winning author whose books have been found on ECPA and CBA bestseller lists. When she is not engulfed in the happy chaos of homeschooling two teenagers, devouring books whole, or avoiding housework, she can be found digging into the rich ancient world of the Bible to discover gems of grace that point to Jesus and weaving them into an immersive fiction experience. Although she and her husband have lived all over the country in their twenty-plus years of marriage, they currently call a little town south of Dallas, Texas, their home.