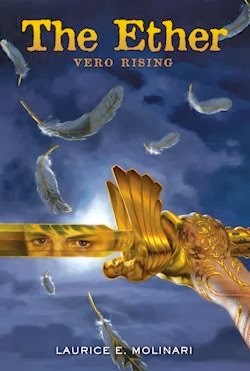 Check out a preview and my review of "The Ether: Vero Rising", courtesy of the publisher and CFBA:

Laurice Elehwany Molinari, a veteran film and TV writer in Hollywood for over two decades, has penned over thirty scripts for various studios and networks. Her very first feature script, written while a fellow at the American Film Institute, became Columbia Picture’s critically acclaimed children’s classic, My Girl. She went on to pen The Brady Bunch Movie and The Amazing Panda Adventure. Laurice lives with her husband and two children in Los Angeles, the City of Angels, where her lifelong love for our heavenly guardians inspired her to write a book about them in the ETHER series.

The Fiercest of Warriors? Vero Leland always suspected he was different from others his own age, ever since his childhood attempts to fly. But he never could have predicted the truth---or how much his life was about to change. Soon after his twelfth birthday, Vero learns he is a guardian angel and is abruptly transported to the Ether, the spiritual realm that surrounds the earth. Yet before he can be counted among these fierce warriors, Vero must learn to master his growing powers, competing with other angels-in- training and battling demonic creatures known as maltures as well as mythical creatures such as the leviathan. Until his instruction is complete, Vero needs to alternate between the Ether and his regular life. If he survives training and accepts his destiny---a destiny he did not choose---he must leave everything behind, including his family and the life he loves. Meanwhile, an evil is growing---the maltures are rising, and Vero appears to be their target.

If you'd like to read the first chapter of The Ether: Vero Rising, go HERE.