Heart-stirring historical fiction: My review of "Defy The Night" by Heather & Lydia Munn 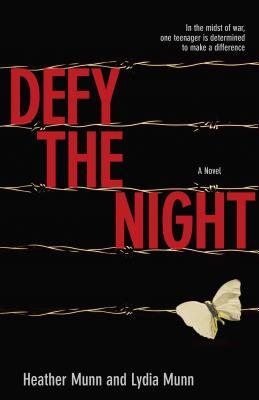 Living in the "free zone" of France in 1941, fifteen-year-old Magali desires nothing more than making a difference, longing to somehow fight against the evil that has swept the land under Nazi rule during World War II. When she meets Paquerette, she is captivated by this young woman who rescues Jewish children from interment camps and from the certain death that awaits them. Magali is overjoyed when Paquerette asks her to help transport the children from the camps, until her impulsive actions place those she cares for in deep danger.

Heather and Lydia Munn have written a compelling story in "Defy the Night", perfectly capturing the angst felt by those living in World War II, and bringing their stories to life in vivid detail. I could almost feel the chill of the biting wind that Magali faced as she walked into the Rivesaltes internment camp, and I felt her horror as she saw what humanity was capable of. Magali is a fascinating character, as she is overly confident in herself and lacks a respectful fear of the Germans, instead despising the fear in her mother and friends. There were moments that I did not always like Magali's actions - and yet she soon endeared herself to me, with her well-intentioned ways that turned out so different than she expected. The authors do an excellent job at capturing the voice of a 15-yr-old, complete with her human flaws - yet not to the point you dislike her. Rather, I found myself empathizing with who she was and who she longed to be, something we all struggle with as teens. Her coming of age story is filled with deep emotion, set in a period of time that will break your heart, yet leave you clinging to hope at the same time.

The story is difficult to put-down, being well-paced and action packed, yet written in a beautiful, lyrical manner. I turned the final page feeling inspired by the bravery of so many who stood firm in the face of evil, truly "defying the night". There is nothing like a war to make you face your weaknesses and overcome them, and the authors did a wonderful job at creating a character who does just that.

I strongly recommend this book and award it 4.5 out of 5 stars.

Book has been provided courtesy of the publisher and Kregel Blog Tour services, for the purposes of this unbiased review.


Lydia Munn was homeschooled for five years because there was no school where her family served as missionaries in the savannahs of northern Brazil. There was no public library either, but Lydia read every book she could get her hands on. This led naturally to her choice of an English major at Wheaton College. Her original plan to teach high school English gradually transitioned into a lifelong love of teaching the Bible to both adults and young people as a missionary in France. She and her husband, Jim, have two children: their son, Robin, and their daughter, Heather.


Heather Munn was born in Northern Ireland of American parents and grew up in the south of France. She decided to be a writer at the age of five when her mother read Laura Ingalls Wilder’s books aloud, but worried that she couldn’t write about her childhood since she didn’t remember it. When she was young, her favorite time of day was after supper when the family would gather and her father would read a chapter from a novel. Heather went to French school until her teens, and grew up hearing the story of Le Chambonsur-Lignon, only an hour’s drive away. She now lives in rural Illinois with her husband, Paul, where they offer free spiritual retreats to people coming out of homelessness and addiction. She enjoys wandering in the woods, gardening, writing, and splitting wood.