Are you SURE this is a debut? Fabulous! "Counted with the Stars" by Connilyn Cossette 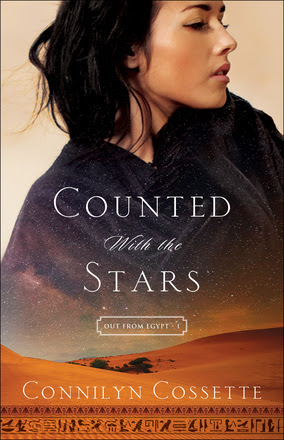 Sold into slavery by her father and forsaken by the man she was supposed to marry, young Egyptian Kiya must serve a mistress who takes pleasure in her humiliation. When terrifying plagues strike Egypt, Kiya is in the middle of it all.

Choosing to flee with the Hebrews, Kiya finds herself reliant on a strange God and drawn to a man who despises her people. With everything she's ever known swept away and now facing the trials of the desert, will she turn back toward Egypt or surrender her life and her future to Yahweh?

Quite simply, I can hardly believe that "Counted with the Stars" is a debut novel! I can honestly say that I loved this novel from beginning to end, finding it to be well-written, engaging, and totally impossible to put down! The author has succeeded at bringing ancient Egypt to life in a way I've never read before, and Kiya is a character whom I instantly felt sympathy for and was rooting for as if she were a real person. All of the characters have been crafted with a sure hand, and seem as real as you and I, struggling to make sense of the hardships we encounter in life. The chapters where the Egyptians encounter the plagues caused me to consider their perspectives in a way I never have before, as the common people truly suffered for the pride that their Pharoah displayed. And yet I gained a new appreciation all the more of how God had to strip all the peoples of their trust in their many gods, to show that He is the one true God. As Kiya finds her own faith in her gods shaken, I could only celebrate as she comes to realize that our God is a God she can trust with every part of her being.

"Counted with the Stars" is written with a wonderful depth that had me experiencing a myriad of emotions along with the characters. Kiya's journey is a triumphant one, as she realizes that in surrender to Yahweh she can walk away from the pain of her past into a future where she knows God has her good in mind. I award this book a rating of 5 out of 5 stars, and urge you to get a copy for yourself!

When she is not homeschooling her two sweet kids (with a full pot of coffee at hand), Connilyn Cossette is scribbling notes on spare paper, mumbling about her imaginary friends, and reading obscure, out-of-print history books. There is nothing she likes better than digging into the rich, ancient world of the Bible and uncovering buried gems of grace that point toward Jesus. Her novel Counted With the Starswon the 2013 Frasier Contest and was a semifinalist in the 2013 ACFW Genesis Contest. Although a Pacific Northwest native, she now lives near Dallas, Texas. Connect with her at www.connilyncossette.com.