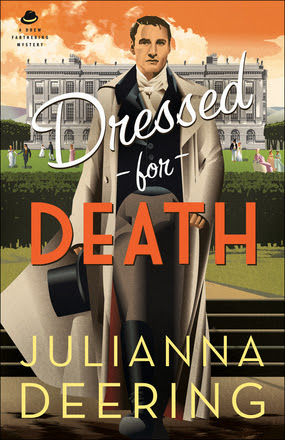 A Regency-Era Costume Party Should Have Been an Amusing Diversion, but it Seems Wherever Drew Farthering Goes, Mystery--and Murder--Are on the Guest List
Drew and Madeline Farthering arrive at a Regency-era house party at Winteroak House, excited to be reunited with old friends, including Drew's former Oxford classmate Talbot Cummins. Tal is there with his fiancée, Alice Henley, and though many present seem worried about the couple, nobody is prepared when Alice dies from an apparent overdose. Tal refuses to believe she'd taken the drugs intentionally, and a dark question arises of whether the death is an accident or murder.
The police have their own information though, and Drew is shocked when they arrest someone he's trusted and admired since his childhood--someone who's been smuggling drugs into the country for years. Stunned by what has happened, Tal begs Drew to get to the bottom of everything, but Drew has never felt more unsettled. Questioning his own ability to see people as they really are, Drew doesn't know whom to trust, and he's not ready for the secrets he's about to uncover--or the danger he'll bring down on everyone he holds dear.

"Dressed for Death" is another great mystery from the talented pen of Julianna Deering. This fourth installment in the Drew Farthering Mystery series is filled with great twists and turns, and though I found the story to start a bit slowly, I greatly enjoyed reconnecting with the characters that starred in the first 3 novels of the series. Drew and Madeline are a fun couple to read about, and now that they are married, readers are treated to a fun whole new dimension of their relationship as well. I quite enjoyed the historical setting of this novel, and how the characters dress up for the regency-era costume party, allowing readers to get a taste of that time period as well. Deering cleverly puts a couple of red herrings in this novel that had me considering the wrong character as a suspect, so I quite enjoyed how cleverly crafted this plot is. The pacing is spot-on and the ending is of course oh so satisfying. Now I will say that though you could read this novel as a stand-alone book, you will appreciate this story all the more if you first have read the first three novels in the series, because then you will have been able to really connect with who these characters are, and appreciate the way that they've developed over the course of the series. So, if you haven't yet read any of the novels in this series, well then what are you waiting for? Go ahead and pick up these books and get sleuthing right now!

Although the murder mystery that is the focus of this story wraps up nicely by the end, there is much left hanging about the future of these characters (especially in terms of what comes next for characters Nick and Carrie in their relationship). So I am definitely hoping that a fifth book is on the way, because I just can't get enough of Drew and the rest of these delightful characters. I award this book a solid rating of 4 out of 5 stars.
Book has been provided courtesy of Baker Publishing Group and Graf-Martin Communications, Inc. Available at your favourite bookseller from Bethany House, a division of Baker Publishing Group.