Another Riveting Read: "Until the Mountains Fall" (Cities of Refuge Book #3) by Connilyn Cossette 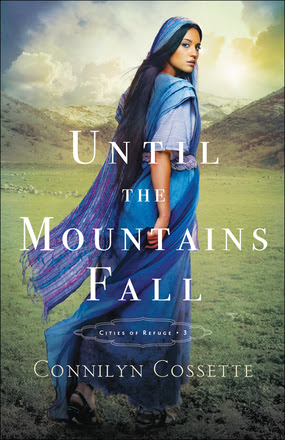 Recently widowed, Rivkah refuses to submit to the Torah law compelling her to marry her husband's brother and instead flees Kedesh, hoping to use her talents as a scribe to support herself. Without the protection of her father, Kedesh's head priest, and the safety of the city of refuge, Rivkah soon discovers that the cost of recklessness is her own freedom.

Malakhi has secretly loved Rivkah for years, but he never imagined his older brother's death would mean wedding her. After her disappearance, he throws himself into the ongoing fight against the Canaanites instead of dwelling on all he has lost. But with war looming over Israel, Rivkah's father comes to Malakhi with an impossible request.

As the enemies that Rivkah and Malakhi face from within and without Israel grow more threatening each day, is it too late for the restoration their wounded souls seek?

Connilyn Cossette has once again crafted a novel that will draw you back in time to the early days of Israel, and introduce you to a host of characters who will bring you heartache and sorrow and moments of joy all at once. The story is very well written and brings history to life in a remarkable way.

Drawing loosely on the story of the prodigal son but offered from the perspective of a daughter and her father instead, "Until the Mountains Fall" drew me in to the point that I knew there was no point putting the book down and I had to just settle in for the night and see where the story led. And by the time the story drew to a close I found that not only had I enjoyed a wonderfully entertaining story, and not only had I grown to care about Rivkah and Malakhi (not to mention the other characters who join them), but I found myself reflecting on my own life at the same time. Rivkah's choices in life offer up a cautionary tale to us all, where we can ignore the blessings we have all around us and allow our own wishes to take over our life, or we can recognize God's hand at work and celebrate his goodness in the midst of trial. As a father, I cannot imagine how I would react if my child made the choices Rivkah made and then simply disappeared from my life. I read the book with a certain tension, unsure exactly how things would turn out. As with Cossette's other novels, there is an element of happiness to the ending, but elements of realism at the same time. You will enjoy the story to the final pages, trust me! But you will be left with that bit of longing in your heart, one I think that points to the hope of Heaven when all things will be made new. As with life, Cossette's characters are left with some broken bits that won't be healed this side of heaven.

Each book in the Cities of Refuge series has proven to be as wonderful as the one before, and so I rate this novel a 4.5 out of 5 stars. Connilyn continues to be an author that I am always on the look out for, and so I'm already looking forward to the fourth and final novel in this series!

When she is not homeschooling her two sweet kids (with a full pot of coffee at hand), bestselling author Connilyn Cossette is scribbling notes on spare paper, mumbling about her imaginary friends, and reading obscure, out-of-print history books. There is nothing she likes better than digging into the rich, ancient world of the Bible and uncovering buried gems of grace that point toward Jesus. Her novel Counted With the Stars won the 2013 Frasier Contest and was a semifinalist in the 2013 ACFW Genesis Contest. Although a Pacific Northwest native, she now lives in North Carolina. Connect with her at www.connilyncossette.com.