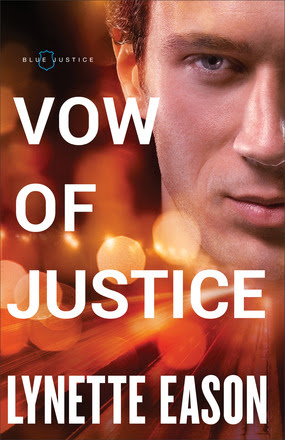 FBI Special Agent Lincoln St. John is living his own personal nightmare. When the woman he loves, Allison Radcliffe, is killed, he devotes himself to tracking down the killers and making them pay for their crimes. He expected it to be a challenge. What he never expected was to find Allison very much alive shortly after her "murder."

As his anger and hurt mix with relief, Linc isn't sure how he's supposed to feel. One thing he does know for sure: he and Allison will have to work together to stop a killer before she dies a second time--this time for good.


The final book in the Blue Justice series, "Vow of Justice", is a non-stop journey of suspense, with an action-packed plot and characters who refuse to give up the fight no matter the cost. Allie is one of those characters who quickly endear themselves to you, with her tragic history of loss in her life when she was younger, her spunk and courage, and her ability to kick some serious butt against evil!

Those readers who especially appreciate Lynette Eason's ability to create sizzling romance in the midst of danger will enjoy the way that Allie and agent Lincoln St. John are not only attracted to each other, but have a real depth to their relationship that is brought on by the belief that each has lost the other person. And of course, Eason keeps the romance clean at the same time she weaves the romance throughout the story. Eason does a great job at keeping you guessing at the villain working behind the scenes in the story, building up to a satisfying ending where good triumphs over evil, the best kind of endings indeed. Most of all, Eason leaves her readers not only feeling entertained, but with a reminder that in the midst of our trials that God will never leave us and never give up on us either. Now that is a message worth hanging on to!

"Vow of Justice" is a fine conclusion to the Blue Justice series, and the last chapter in particular will bring a smile to the faces of those who have been reading these books from start to finish. If you haven't read the prior books in the series, you can easily read this novel as a stand alone. But why would you want to miss out? I found Lynette Eason's latest novel to be a solid read indeed and award it 4 out of 5 stars.

Lynette Eason is the bestselling author of Protecting Tanner Hollow, as well as the Blue Justice, Women of Justice, Deadly Reunions, Hidden Identity, and Elite Guardians series. She is the winner of three ACFW Carol Awards, the Selah Award, and the Inspirational Reader's Choice Award, among others. She is a graduate of the University of South Carolina and has a master's degree in education from Converse College. Eason lives in South Carolina with her husband and two children. Learn more at
www.lynetteeason.com.