A fabulous follow-up: "On Wings of Devotion" by Roseanna M. White 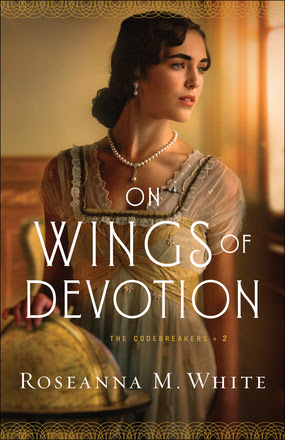 Against Every Warning, She's Drawn
Ever Closer to the Man Known as "Black Heart"


All of England thinks Major Phillip Camden a monster--a man who deliberately caused the deaths of his squadron. But he would have preferred to die that day with his men rather than be recruited to the Admiralty's codebreaking division. The threats he receives daily are no great surprise and, in his opinion, well deserved.

As nurse Arabelle Denler observes the so-dubbed "Black Heart," she sees something far different: a hurting man desperate for mercy. And when their families and paths twist together unexpectedly, she realizes she has a role to play in his healing--and some of her own to do as well.

With Camden's court-martial looming, an old acquaintance shows up, intent on using him in a plot that sends the codebreakers of Room 40 into a frenzy. With their fragile hopes for the future in the cross hairs, Arabelle and Camden must hold on to hope--and to each other--if they want to survive.

The second addition in "The Codebreakers" series is a fabulous follow-up to the intriguing "The Number of Love" novel which started things off so well last year. I was eager to reconnect with some of the prior characters from the series, and enjoyed meeting the new stars of the show at the same time. When Major Phillip Camden showed up on the scene in the prior novel, I was quite curious about his story and what had made him into the "monster" people believed him to be. I was certain his story would be an interesting one - and I definitely was not disappointed!

From the get go of "On Wings of Devotion", I was drawn into the tale and the intricate plot that Roseanna M. White has crafted. The story sails along with nary a dull moment to leads things astray, and the characters each bring much to the story with their trials and triumphs. The backstories of both Phillip and Arabelle sure tugged on my heart strings, making me root for them all the more as they try to navigate not only the challenges of their own relationship, but their relationships with others - not to mention Camden's court martial and the horrific ending that promises! As with all of her stories, White has woven in interesting historical details into her novel that really bring the story to life. And the last few chapters of the story simply flew by as I raced to see how everything was going to resolve.

I continue to be amazed at the fascinating stories that Roseanna M. White crafts, and this one is no exception. "On Wings of Devotion" was a wonderfully written novel, and I award it 4.5 out of 5 stars.