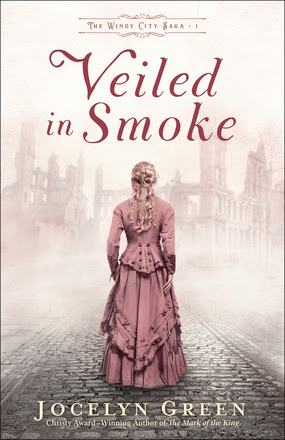 The Flames Took So Much.

She Can't Lose Her Father As Well.

Meg Townsend and her sister, Sylvie, seek a quiet existence managing the family bookshop. Meg feels responsible for caring for their father, Stephen, whose spirit and health are both damaged from his time as a prisoner during the Civil War. Her one escape is the paintings she creates and sells in the bookshop.

Then the Great Fire sweeps through Chicago's business district. The fiery explosions and chaos stir up memories of war for Stephen as he runs from the blaze and becomes separated from his daughters. Days later, when the smoke has cleared, Meg and Sylvie manage to reunite with him. Their home and shop are lost, and what's left among the ashes may be even more threatening than the flames, for they learn that a close friend was murdered the night of the fire--and Stephen has been charged with the crime. After he is committed to the Cook County Insane Asylum, where they cannot visit him, Stephen feels as lost to them as the shop that now lies in rubble.

Though homeless and suddenly unemployed, Meg must not only gather the pieces of her shattered life but prove the truth of what happened that night, before the asylum truly drives her father mad.

With a deft hand, Jocelyn Green has taken the event of the Great Fire that ravaged the city of Chicago, and wrapped it in a tale that is infused with mystery and intriguing historical details. The novel is distinctly different than anything else I've read about that tragic event, particularly because of the mental illness that Meg and Sylvie's father, Stephen, suffers from. The moments that Green allows us to peer through his eyes and see inside his mind reveals a madness stemming from the Civil War that I've never really stopped to think about in terms of the Wars impact on countless men's state of minds. The horrific treatment methods were not easy to read about, though Green doesn't delve too deeply into that aspect, but it is a definite reminder that our society's understanding of mental illness has come a long way. Meg and Sylvie's determination to remain loyal to their father despite his issues and despite their uncertainty even over his innocence made for a touching story. And as the elements of this mystery unfolded I appreciated that Green created a villain that readers could both dislike in terms of their behaviour while feeling sympathy for what the person has gone through.

One piece of the story that I especially liked was how, though Meg experiences difficult losses in the fire, those losses later are used to portray the power of resilience and overcoming hardship. I don't want to spoil the story by saying more about how this unfolds, but suffice it to say that I found my own faith stirred by witnessing God's promises in action, for does not God surely promise to bring good out of that which was meant for harm?

Jocelyn Green has written another riveting read in "Veiled in Smoke", and I'm so pleased that she has chosen to craft a series with this Windy City Saga rather than offering another stand alone novel. If this is how things are starting off, I'm sure that the next book in line is going to be worth reading indeed! As for "Veiled in Smoke", I award this novel a solid 4 out of 5 stars.