Both heartbreaking and hopeful: A Portrait of Loyalty by Roseanna M. White 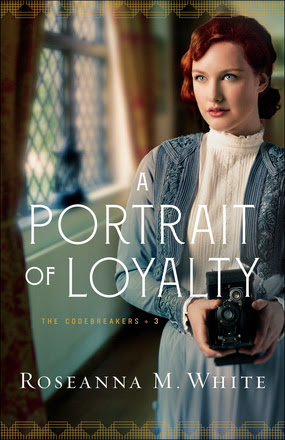 
my review....
The third book in The Codebreakers trilogy is every bit as exciting as the first two novels in the series, combining intriguing historical subterfuge, characters with divided loyalties, and an ending that is both heartbreaking and hopeful at the same time.
“A Portrait of Loyalty” focuses on a number of different characters, and in so doing not only brings readers back in time to World War I, but showcases a number of different cultures such as English and French and Russian, at the same time. Lily is sure to be the favourite character of many, serving selflessly as a nurse’s aid, but in her most interesting role, working to alter pictures as a form of false propaganda to mislead the enemy troops. I had no idea there was such a thing a hundred years ago! Her keen eye for photography added a real depth to the story, as she was constantly finding a different angle or special moment to snatch a photo here or there, bringing beauty to a time in history where this was often missing from life. Her close relationship with her sister especially was a nice addition to the story, and it is within their joint story line that your heart will be bruised. And no story in this series would be complete without a thread of love as well, and therein enters Zivon Maron, formerly a top cryptographer in Russia, now working for England and trying to work through the deep losses he has experienced. I enjoyed watching Zivon grow over the course of the story, reconnecting to God and finding the strength to embrace forgiveness in every sense of the word.

If you are anything like me, “A Portrait of Loyalty” will be almost impossible to put down once you have immersed yourself into these characters’ lives and entered into the action and suspense permeating the pages. (And at a time when we are facing Covid in the real world, watching these characters encounter the Spanish Flu of 1918 was both sobering and brought hope too, reminding me that the world has lived through times like these before – and not only survived but thrived since then at the same time). I award this novel a rating of 4.5 out of 5 stars and encourage you to grab a copy for yourselves!

Roseanna M. White (www.roseannamwhite.com) is a bestselling, Christy Award-nominated author who has long claimed that words are the air she breathes. She pens her novels beneath her Betsy Ross flag, with her Jane Austen action figure watching over her. When not writing fiction, she's homeschooling her two children, editing and designing, and pretending her house will clean itself. Roseanna is the author of numerous novels, ranging from biblical fiction to American-set romances to Edwardian British series. Roseanna lives with her family in West Virginia. Learn more at www.roseannamwhite.com.
Buy now from Amazon.com