Better even than I hoped for: My review of Words Spoken True by Ann H. Gabhart 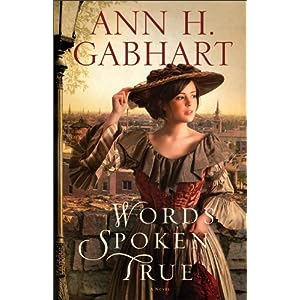 Fans of Ann H. Gabhart, rejoice! Words Spoken True is a superb book that lives up to her reputation, so read on to learn more and see my review of this great book:

Book Synopsis as provided by the publisher:

Adriane Darcy was practically raised in her father's newspaper offices. She can't imagine life without the clatter of the press and the push to be first to write the news that matters. Their Tribune is the leading paper in Louisville in 1855. Then Blake Garrett, a brash young editor from the North with a controversial new style of reporting, takes over failing competitor the Herald, and the battle for readers gets fierce.

When Adriane and Blake meet at a benefit tea, their surprising mutual attraction is hard to ignore. Still, Blake is the enemy, and Adriane is engaged to the son of a powerful businessman who holds the keys to the Tribune's future. Blake will stop at almost nothing to get the story--and the girl. Can he do both before it's too late?

I can honestly say I picked up this book expecting to read a gentle "historical romance" in the vein of dozens of other similar historical romance books I've read. What I found, instead, was a book with unique characters who refuse to bow to convention, thrown in with suspense and murder and political tension broiling over into riots. The historical setting of the book is absolutely captivating, especially with the "Know Nothing" party that is determined to trample the rights of immigrants, such as by physically barring them from voting. The world of warring newspapers is equally interesting to read about. But my favourite part of the book is the character of Adriane, whose actions cannot help but scandalize the gentle upcrust society.  Adriane seems determined to prove wrong the popular sentiment of her day that "too much thinking on serious matters was reputed to be injurious to the female brain", a line that I read out loud to my wife and which caused her eyebrows to raise significantly. My, how times have changed! The villain in the story is deliciously creepy (if you love stories with suspense, in any case), and although I figured out early who the murderer was due to the author's well-paced clues, the journey to his eventual unveiling is an exciting one.

I give this book my highest rating of 5 out of 5 stars, and look forward to what the author has up her sleeve for her next book...

Ann H. Gabhart started writing when she was ten and has been writing ever since. Her first published writings were personal experience pieces, youth stories, and poems in church periodicals such as HomeLife. Her first novel, a historical romance about the settling of Kentucky, was published by Warner Books in 1978. Since then, she's published numerous books for both adults and young adults. The Scent of Lilacs, her first inspirational novel, was chosen as one of the Top Ten Books in Christian Fiction in 2006 by Booklist magazine. Her first Shaker book, The Outsider, was a finalist for Christian Fiction Book of the Year in 2009 and was a Top Pick by Romantic Times Book Review Magazine.

Ann lives on a farm in Kentucky not far from where she was born. She and her husband, Darrell, a bass singer in the Patriot Quartet, have three children and nine grandchildren. Her website is www.annhgabhart.com.
Email Post
Labels: words spoken true book review newspapers louisville murder mystery reporters competitors political drama louisville historical romance graf-martin baker publishing revell