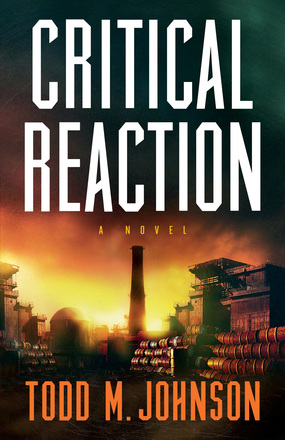 Check out a preview and my review of the latest book from Todd M. Johnson, courtesy of the publisher and CFBA:

Todd M. Johnson has practiced as an attorney for over 30 years, specializing as a trial lawyer. Todd's career experience blends with his passion for writing in his novels published through Bethany House.

A graduate of Princeton University and the University of Minnesota Law School, he also taught for two years as an adjunct professor of International Law, and served as a US diplomat in Hong Kong.

Todd lives outside Minneapolis, Minnesota, with his wife Cathy and children Ian and Libby.

After decades of turning out plutonium for the arms race, the Hanford Nuclear Facility has long been shuttered, though its deadly legacy cannot be fully contained. The men who guard the facility from sabotage or monitor its buildings for radiation leaks are told the risks are under control. They believe it, until the worst happens: a thunderous explosion in the dead of night.

Two workers, lifer Poppy Martin and new hire Kieran Mullaney, believe themselves lucky to survive the blast. But as the debris is cleared, they discover their safety is not assured. Dead ends and closed doors halt their efforts to discover what really happened--and what radiation may have poisoned them. When stalling and threats force them into the hands of experienced trial lawyer Ryan Hart, they learn that theirs is no ordinary lawsuit. There is something still hidden in the desert of eastern Washington, and someone is willing to go to extreme lengths to make sure it never sees the light of day.

If you would like to read the first chapter of Critical Reaction, go HERE.

I opened the pages of "Critical Reaction", and within moments found myself gripping the pages of the book as I watched the scenes unfold with vivid drama. The writing is powerful and immersive, and I found myself imagining what it would be like to be working in a former nuclear facility, and then live through an explosion such as is described. I don't want to go into too many details as I would hate to spoil the book for you, but suffice it to say that the concepts presented in this novel are utterly chilling to imagine unfolding in real life.

Todd M. Johnson once again brings his excellent writing skills and his legal experience together to produce a suspenseful, fast-paced read. I raced through the pages, wanting to find out the explanation for what happened at the beginning of the novel, and craving to see how the court-room drama would all play out. Johnson unfolds the plot of the story with skill, unfolding the truth one piece at a time to result in a swift-moving book. The characters are wonderfully developed, and I enjoyed the daughter-father relationship that the author explores, complete with tension and misunderstandings and a slow process of reconciliation that makes for some enjoyable scenes. Johnson even throws some romance into the story, the kind that will appeal to both male and female readers.

I don't know about you, but I love a good legal thriller - and this is one of them! I highly recommend this book and award it 4.5 out of 5 stars.