A satisfying finale: "Searching for You" by Jody Hedlund 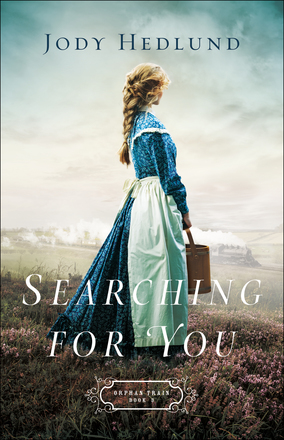 
For years, Sophie Neumann has been running from the orphanages of 1850s New York City. Tasked with caring for two younger children, she's determined not to let them be taken from her, and not to abandon them the same way her older sisters did her. But times are growing desperate, and when she falls in with the wrong crowd and witnesses a crime, she realizes fleeing the state is her only option.

Disappearing with her two young charges into a group of orphans heading west by train, Sophie hopes to find safety and a happy life. But when the train stops in Illinois, she faces an agonizing decision as the orphans will be placed in new homes. Afraid she'll lose them forever, she finds help in a familiar face she never expected to see so far from New York.

Reinhold Weiss has finally purchased his own small farm in Illinois. With mounting debts, a harvest to bring in, and past scars that still haunt him, Reinhold is in no position to give his heart away . . . but can he say no when his long-lost friend shows up on a nearby farm pleading for his help?

Bringing the Orphan Train series to a satisfying conclusion, "Searching for You" is another heart-stirring historical tale from the talented pen of Jody Hedlund. Fans who enjoyed the first two books of the series will be pleased to focus on the tale of the third Neumann sister, Sophie, as we finally learn what became of her and the two young children she'd rescued from the streets. Sophie's tale has a bit less of a rags to riches theme than the prior two novels did, and I loved watching Sophie fight for what she believes in, putting the best interests of her young charges before her welfare, often to her own detriment. I also liked getting reconnected with Reinhold, who we had gotten to know fairly well in the second novel, but not the way we do now in "Searching for You"! Both Sophie and Reinhold show selflessness in a way that will inspire readers and point them towards a loving God who has given up everything for our good.

And while the first two novels in the series had their own share of romance, I must say that this third and final book in the series fairly sizzles with romantic tension! When I first started the novel, I thought things between Sophie and Reinhold were going to unfold in a fairly predictable fashion, but I assure you that Hedlund has thrown in plenty of twists to keep readers guessing. Yet even more than their romantic journey, watching these characters overcome their pasts and their feelings of unworthiness was satisfying indeed, making the end result all the sweeter for the trials they'd been through. The theme of the novel, of God being able to do even more than we can ask or imagine, is brought to life in a truly moving manner and will leave a smile on your face.

Hedlund's final novel in the series brings things full circle, and I have no doubt that her faithful followers will enjoy "Searching for You". I award this novel a solid rating of 4 out of 5 stars.

Jody Hedlund (www.jodyhedlund.com) is the author of over 20 novels, including Love Unexpected, Captured by Love, Unending Devotion, The Preacher's Bride, and A Noble Groom, winner of the 2014 Carol Award for historical romance. She received a bachelor's degree from Taylor University and a master's from the University of Wisconsin, both in social work. She lives in Michigan with her husband and five children. She loves hearing from readers on Facebook and on her blog.