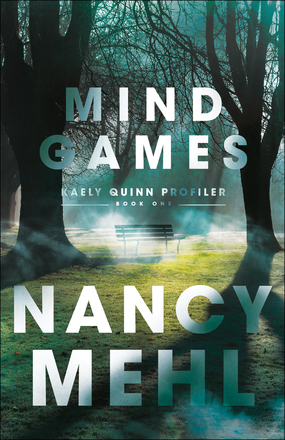 
FBI Behavioral Analyst Kaely Quinn's methods may be highly unorthodox, but her talent is undeniable. She's done her best to establish a new life for herself after being demoted and transferred to St. Louis when a reporter revealed she's the daughter of an infamous serial killer. But when that same reporter claims to have received an anonymous poem predicting a string of murders, ending with Kaely's, it seems her old life has followed her.

When a body is found that fits the poem's morbid predictions, Kaely and her new partner, Special Agent Noah Hunter, are forced to move past his skepticism of her approach and work together to unravel the deadly riddle.

With a brazen serial killer who breaks all the normal patterns on the loose, Noah and Kaely must race to catch the murderer before anyone else, including Kaely, is killed.


I've read a few Nancy Mehl books in my time, but nothing prepared me for "Mind Games", a novel that was thoroughly absorbing and impossible to put down. FBI Behavioural Analyst Kaely is an utterly intriguing character, being the daughter of a serial killer, and her methods of ferreting out killers in her role with the FBI makes for addictive reading. Mehl lays things out, piece by piece, drawing you into the story as Kaely races to figure out who the murder is. Although tagged as "romantic suspense", I found that the novel was less romantic than these kinds of novels can tend to be, something I appreciated and something I think will broaden the appeal of these novels. Wives and husbands alike are going to love this book, which felt chillingly plausible at times, one that will keep you guessing as the chapters unfold. And I think what most impressed me about the book is that in the midst of the tense scenes, Mehl also explores some deeper themes about God and faith and doubt, things that all Christians can wrestle with at times. The author celebrates that God can do the seemingly impossible, something that is born out in the Bible and also our own lives, and I like how she has woven this into the midst of a tale that can otherwise seem dark with all the murders going on.

"Mind Games" is a well-crafted suspense novel that I dare you to stop reading once you've begun the tale. The pacing is spot-on, the characters are ones you just can't help but become endeared to, the ending is just as good as you could have hoped for. Honestly, I'm pretty sure this is Nancy Mehl's best book to date. I simply can't wait for the next Kaely Quinn book to be released, because if it's anything like this, it is going to be a "must read". I award "Mind Games" 4.5 out of 5 stars.

Nancy Mehl (www.nancymehl.com) is the author of more than thirty books, including the Road to Kingdom, Finding Sanctuary, and Defenders of Justice series. She received the ACFW Mystery Book of the Year Award in 2009. She has a background in social work and is a member of ACFW and RWA. She writes from her home in Missouri, where she lives with her husband, Norman, and their Puggle, Watson. She is part of The Suspense Sisters: www.suspensesisters.blogspot.com, along with several other popular suspense authors. She is also very active on Facebook.