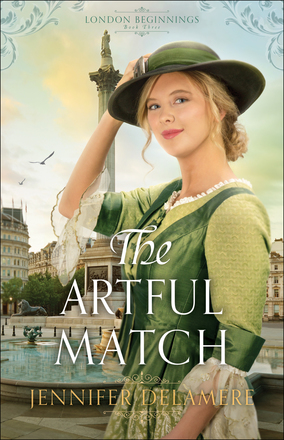 Her Entire World Is Changing . . .
But Will She Follow the Leadings of Her Heart or Her Head?


Cara Bernay has never fit in. At loose ends in 1881 London after a near tragedy costs her a job, she is befriended by a rising young artist. With his help, she begins planning a new life and developing her own artistic talent. But soon Cara finds herself at odds with the artist's brother--a handsome but stern earl forcing his brother back to a "respectable" life.

Henry Burke, the Earl of Morestowe, feels the weight of growing financial burdens. His spendthrift and emotionally unstable brother is making matters worse, and Henry needs him back home. Despite misgivings about Cara's mysterious background, Henry sees she's a positive influence on his brother and on Henry's unruly young ward, and he strikes a deal with her to return with them to their estate.

But the family has their own secrets, and when Cara, drawn ever closer to Henry, stumbles onto the truth, she must choose between following her heart and pursuing a bold plan that could bring disaster.

Delamere's third novel in the London Beginnings series is simply delightful, a fitting conclusion to what has been a highly enjoyable series. Although the first two sisters to be featured in the series, Rosalyn and Julia, are great characters in their own right, Cara is sure to steal your heart every bit as much if not more so than her sisters did! Her pluck and determination, not to mention her penchant for getting into trouble, make her a character who you just can't help but like. As she steps into Henry's life and into that of his ward (not to mention his mother!), you will find yourself cheering her on for her somewhat unconventional ways and her sweet spirit. Add in the spice of a somewhat frowned upon relationship with Henry, an Earl who of course shouldn't even be giving a second look to someone who is an orphan, and you have a recipe for an intriguing tale. The love that grows between them will honestly bring a smile to your face, and I appreciate that they never play with each other's affections but are instead honourable in the way things unfold between them.

Delamere does an excellent job at bringing full circle some of the threads she'd left dangling from the prior books in the series, such as the fate of the girl's father, and I can attest to the fact that the conclusion is simply heart-warming in every way. The end result is a book that is filled with adventure, love, and secrets, a book that lifted my heart and my spirits and provided some great entertainment, just what I was looking for! I award this novel 4.5 out of 5 stars.

Jennifer Delamere's debut Victorian romance, An Heiress at Heart, was a 2013 RITA Award finalist in the inspirational category. Her follow-up novel, A Lady Most Lovely, received a starred review from Publishers Weekly and the Maggie Award for Excellence from Georgia Romance Writers. Jennifer earned a BA in English from McGill University in Montreal, where she became fluent in French and developed an abiding passion for winter sports. She's been an editor of nonfiction and educational materials for nearly two decades, and lives in North Carolina with her husband. Learn more at www.jenniferdelamere.com.