Infused with fascinating historical detail: "Far Side of the Sea" by Kate Breslin 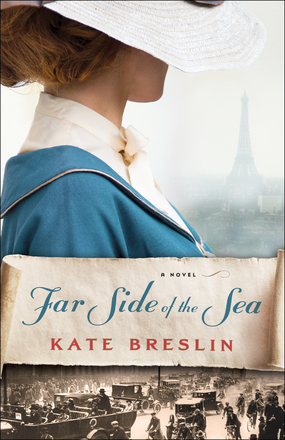 In 1918 England, Lieutenant Colin Mabry spends his days decoding messages for MI8 after suffering injuries at the front. When he receives an urgent summons by carrier pigeon from Jewel Reyer--a woman who saved his life and whom he believed to be dead--he can only hope he'll regain the courage he lost on the front lines as he's driven back into war-torn France.

But Jewel isn't the one waiting for him in Paris. Instead, it is a stranger who claims to be her half sister, Johanna, who works at a dovecote for French Army Intelligence. She found Jewel's diary and believes her sister is alive and in the custody of a German agent. With spies everywhere, Colin is at first skeptical of Johanna, but as they travel across France and Spain, a tentative trust grows.

That trust is quickly put to the test, however, when their pursuit leads them straight into the midst of a treacherous plot and their search for answers quickly turns into a battle for their lives.


Infused with fascinating historical detail paired with danger and intrigue, "Far Side of the Sea" is a book that will delight Kate Breslin's fans! Breslin does an admirable job of plucking up her readers and setting them down in the midst of history, exploring the realities of the Great War, such as how Lieutenant Colin Mabry suffers from what we now know to be PTSD. I appreciated the interesting extra facts she adds in as well, such as the way that carrier pigeons were used in the war. Breslin offers a fascinating glimpse into what it would have been like living in Paris during the war, one minute dining in a fine restaurant, the next rushing down to the cellar as bombs are dropping, only to return to your meal once the dust settles! I can't even imagine what that would be like to actually live through, but Breslin offers us such a glimpse in the pages of her story.

I enjoyed the way that Breslin brings Colin and Jewel together, especially as Jewel's pluck and courage shine through the actions she undertakes to find her sister. The romance that simmers between them, while in and of itself will no doubt please readers, is made all the richer by the way that God moves in their hearts and brings them healing and love of a better kind. While I didn't find this book to be as consistently paced as her prior novels, it is nevertheless an enjoyable read that offers much to those who appreciate a well-written historical fiction novel.

A Florida girl who migrated to the Pacific Northwest, Kate Breslin was a bookseller for many years. She is a Carol Award winner and a RITA and Christy Award finalist and lives with her husband in Seattle, Washington. Find her online at www.katebreslin.com.