The Number of Love (The Codebreakers Book #1) by Roseanna M. White 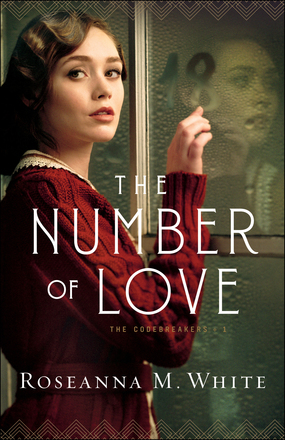 
Three years into the Great War, England's greatest asset is their intelligence network--field agents risking their lives to gather information, and codebreakers able to crack German telegrams for hints of the enemy's plans. Margot De Wilde thrives in the environment of the secretive Room 40, where she spends her days deciphering intercepted messages. But when her world is turned upside down by an unexpected loss, she discovers for the first time in her life that numbers aren't enough.

Drake Elton returns wounded from the field, followed by an enemy who just won't give up. He's smitten quickly by the quick and brainy Margot, but soon the dangers of the war draw ever closer. Margot and Drake will have to team up to save themselves from the very secrets that brought them together.

If you devoured the last series from Roseanna M. White (the Shadows over England), you will be no stranger to the brilliant Margot, and so likely have been looking forward to this book as much as I was! And let me tell you that it was well worth the wait. This first novel in "The Codebreakers" series is a fascinating start to the series, looking at the role that the Codebreakers played in World War I. Quite honestly, while I was reading this book I found myself in a constant state of surprise about the sophisticated codes that were used at that point and the ability of these codebreakers to find the key to solving the code. I had no idea that these people played such a vital role in the War! The author has succeeded not only at bringing history to life, but unearthing a piece of history I was never really aware of.

White has done an admirable job indeed of fleshing out these characters, giving us a deeper look into who Margot is, and pairing her up with the courageous Drake in fine fashion. When I started this novel I wasn't quite sure how White was going to bring the quirky Margot to a place where she felt safe enough to open up her heart, but by the end of the book the journey just felt natural and right and I'm sure that other readers will agree that White has infused just the right touch of romance into the tale. And I also actually really enjoyed the friendship that blossomed between Margot and Drake's sister Dot too, as both of these women are just so unique compared the characters that we often encounter. Finally, the way that Margot not only hears God's voice in such a personal way but learns to trust him even when she doesn't hear his voice as clearly as she once did added an even more special touch to the story. May we all so faithfully seek out God's voice in our own lives.

All in all, I'm quite glad that "The Number of Love" is just the first book in the series, because Roseanna M. White has once again launched a trio of novels that I'm certain will all need to end up on my "must keep" shelf. This first novel has already found a place there! I award this book a rating of 4.5 out of 5 stars.