A riveting read: "The Spice King" by Elizabeth Camden 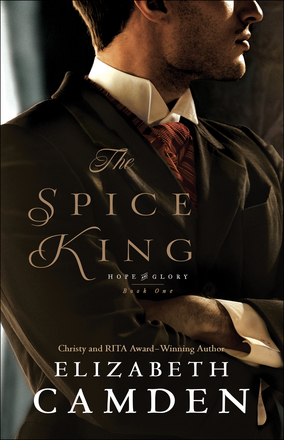 
Gray Delacroix has dedicated his life to building an acclaimed global spice empire, but it has come at a cost. Resolved to salvage his family before they spiral out of control, he returns to his ancestral home for good after years of traveling the world.

As a junior botanist for the Smithsonian, Annabelle Larkin has been charged with the impossible task of gaining access to the notoriously private Delacroix plant collection. If she fails, she will be out of a job and the family farm in Kansas will go under. She has no idea that in gaining entrance to the Delacroix world, she will unwittingly step into a web of dangerous political intrigue far beyond her experience.

Unable to deny her attraction to the reclusive business tycoon, Annabelle will be forced to choose between her heart and loyalty to her country. Can Gray and Annabelle find a way through the storm of scandal without destroying the family Gray is fighting to save?


With a cast of colourful characters and a plot that is inventive and expertly crafted, Elizabeth Camden's latest novel, "The Spice King" is truly a riveting read. I have long been a Camden fan and so I approached this book with the highest of expectations. And, I can attest that these have been met!

I greatly enjoyed the slice of history that Camden treats us to, and once again she manages to take a historical development that I would ordinarily expect to be dry indeed if I were to glance upon it in a textbook, and give it life and flavour. The issue of the safety and labelling of processed food takes on a human element until I felt engaged in the same passionate pursuit of justice and rightness that these characters end up following. Add in the delightful repertoire between Gray and Annabelle, with clever dialogue and just the right dash of romance, and you have a recipe for a book you simply won't want to put down. The situation of intrigue involving Gray's brother adds a whole new layer to the tale, and though of course I wish that this had been altogether resolved in book one, it certainly has made me curious to see just what exactly is going on for this brother locked away in a Cuban jail. Is he truly a criminal, or is there more than meets the eye? I dare not say more, of course, for I hate to spoil the plot in any way. But trust me when I say that if you are in the mood to embrace the Fall weather and curl up with a pumpkin spice latte and a good book, then make sure it is this book that you are reaching for! You will be glad you did.

"The Spice King" is a marvellous beginning to what is shaping up to be a promising series. I turned the final page of this novel already eager for the next one, and I hope the wait won't be too long! I award this novel a full 5 out of 5 stars.

Elizabeth Camden (www.elizabethcamden.com) is best known for her historical novels set in Gilded Age America, featuring clever heroines and richly layered storylines. Before she was a writer, she was an academic librarian at some of the largest and smallest libraries in America, but her favorite is the continually growing library in her own home. Her novels have won the RITA and Christy Award, and she lives in Florida with her husband, who graciously tolerates her intimidating stockpile of books.