Starts the series with a bang: "The Killing Tide" by Dani Pettrey 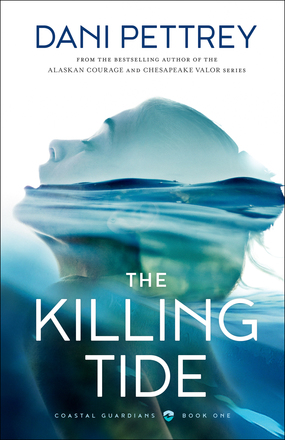 
A Corpse That Only Leads to Secrets.
An Old Flame with Danger Written all over Her.
Things Are about to Get Very Complicated.

When one Coast Guard officer is found dead and another goes missing, Coast Guard Investigative Service special agent Finn Walker faces his most dangerous crime yet. His only clues are what little evidence remains aboard the dead officer's boat, and the direction the clues point to will test Finn and the Guard to their limits.

The already volatile situation is complicated even further by the arrival of Gabby Rowley--Finn's boss's sister and an investigative reporter with unrelenting questions about the crime. Now that she's returned, the tug on Finn's heart is strong, but with the risks she's taking for her next big story, he fears she might not live through it.

Thrown together by the heinous crime, Finn and Gabby can't ignore the sparks or judgments flying between them. But will they be able to see past their preconceptions long enough to track down an elusive killer, or will they become his next mark?


"The Killing Tide" kicks off Dani Pettrey's "Coastal Guardians" series with a bang, with nail-biting scenes, flying bullets, and a break-neck paced plot that doesn't let up for a moment. Romantic suspense fans, this is the book you've been looking for!

I've read a number of Dani Pettrey's books in the past, and as with her prior books Pettrey does a good job at crafting an exciting tale that still leaves space for those heart-warming moments at the same time. Finn is quite the hero, with a heart of grace and forgiveness, and though Gabby has made some mistakes along the way, I admire his willingness to give her a second chance. I also like that the author doesn't just make that an easy decision but that the characters have to work at it, just like we do in our own lives. There are many characters to love here, from Finn to Gabby's brother Noah or friend Rissi. Gabby was not always my favourite character, with her tendency to leave those seeking to protect her or other actions that made her seem a bit selfish. But I enjoyed the way she grows and changes over the course of the story. I also appreciated the way that Pettrey brings God and prayer into the character's lives, where the characters just breathe their faith in such a natural way, and find comfort through the difficult times.

Readers who have enjoyed the many novels that Dani Pettrey has penned will no doubt also enjoy this start to her latest series. From the intriguing world of the Coast Guard Investigative Services to the action packed moments to the engaging romance, there is much to enjoy. I award this novel 4 out of 5 stars.

Praised by New York Times best-selling author Dee Henderson as "a name to look for in romantic suspense," Dani Pettrey has sold more than half a million copies of her novels to readers eagerly awaiting the next release. Dani combines the page-turning adrenaline of a thriller with the chemistry and happy-ever-after of a romance. Her novels stand out for their "wicked pace, snappy dialogue, and likable characters" (Publishers Weekly), "gripping storyline[s]," (RT Book Reviews), and "sizzling undercurrent of romance" (USA Today).

From her early years eagerly reading Nancy Drew mysteries, to paging through Agatha Christie novels or watching on-the-edge-of-her-seat adventure movies, Dani has always enjoyed mystery and suspense. She considers herself blessed to be able to write the kind of stories she loves--full of plot twists and peril, love, and longing for hope and redemption. Her greatest joy as an author is sharing the stories God lays on her heart.  She researches murder and mayhem from her home in the Washington DC, metro area, where she lives with her husband. Their two daughters, a son-in-law, and two adorable grandsons also reside in Washington DC. For more information about her novels, visit danipettrey.com.