Fast moving & impossible to put down: My review of "The Alligator Man" by James Sheehan 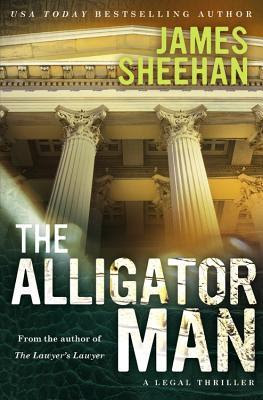 Kevin Wylie's crooked boss wants to run him out of town, and Kevin's long-time girlfriend is ready to take a hike. He decides that now is the time to leave Miami, visit his father, who he hasn't seen in 28 years, and get some answers. Heading back to his hometown, he doesn't realize that he and his dad will become embroiled in a murder case.

The victim, one of the richest and most-hated corporate criminals in America has been dubbed The Alligator Man since pieces of his clothing were found in a local swamp. Billy Fuller had every reason in the world to want Johnson dead and all the evidence leads right to his doorstep. But legendary trial lawyer Tom Wylie believes in Billy and he and his son reunite to fight the courtroom battle for Billy's life.

The Alligator Man is a story of greed, anger, love, redemption and two powerful trial attorneys who fight to the end-- and risk everything--for the truth.

"The Alligator Man" sees James Sheehan return in fine form with his fourth novel, a book likely to attract a number of new fans. Filled with suspense and intrigue, and court-room scenes that showcase Sheehan's own trial experience, the book moves at a fast pace and I simply couldn't put it down! I greatly enjoyed the unique characters that make up the supporting cast, such as Carlisle, a man who is able to traverse the wild swamps with ease and who has a unique perspective on life. His role as auxiliary officer made for some light-hearted and humorous scenes as his steady work on the murder case showed up that of the more seasoned detective also assigned to the case. And I truly enjoyed the main character, Kevin, a guy who is just utterly likeable, someone who isn't perfect and who makes mistakes, but in the end is a man who stands up for justice.  Sheehan is careful to create a well-rounded character in Kevin, as he struggles with his past and his family identity and determining what type of man he wants to be, what kind of long-lasting impression he wants to make through his career. The subplot involving the reconciliation he experiences with his father makes for some moving moments! Thus, in the middle of an action-packed novel, I found myself reflecting on the own choices I'm making in my own life.

I strongly recommend "The Alligator Man", certain that fans of legal thrillers are going to enjoy this carefully plotted and well-written novel, full of twists and turns and nail-biting scenes! 4.5 out of 5 stars.

Book has been provided courtesy of Center Street, a division of Hachette Book Group (Canada), for the purposes of this unbiased review.


++  I should warn readers of this site that there is some swearing in the book, so if this is not something you are comfortable with, then please read the book with caution.

James Sheehan is the author of The Lawyer's Lawyer, The Mayor of Lexington Avenue, and The Law of Second Chances. He was a successful trial attorney for 30 years, and currently teaches trial law and is the Director of the Tampa Law Institute at Stetson University College of Law in Tampa, Florida. Learn more at jamessheehanauthor.com - See more at: http://www.hachettebookgroup.com/authors/james-sheehan/#about