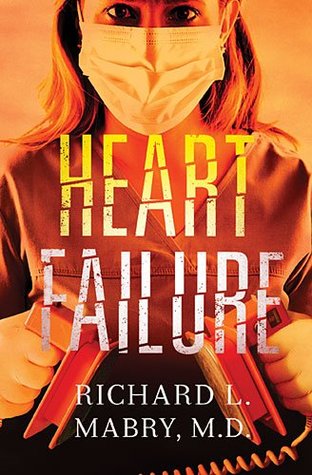 Dr. Carrie Markham and Adam Davidson are celebrating a date night at the movies when shots fired by a vehicle driving by shatter the night air. Soon, Carrie's world seems out-of-control, as she learns that the shooting may not be random and that her fiancé of one week is not the man she believed him to be. Adam must decide whether to run, as he has in the past, or whether he should stay to confront the ones he is convinced are after him. Carrie must decide whether she will believe Adam's story, and whether she can again trust her heart to him. No matter what they decide, they are both sure of one thing - someone is out to kill them.

Dr. Richard Mabry has written a tale infused with suspense, medical drama, and twists and turns as readers are left guessing what is going on. The chapters are chock-full of action, and there are plenty of potential villains in the story to lead readers in a number of different directions. I enjoyed the character of Carrie in particular as I learned of her past of losing her husband, and her determination to move through her hurts and struggles and forge a new path. I do have to admit that parts of the plot did not always make sense to me, such as Adam's reaction to the initial drive-by shooting. I'm not sure that someone with his past would truly stay put the way that he does, or that he'd assume that someone stalking him wouldn't know where both he and Carrie live. However, I know that this is just my opinion, and perhaps this is how someone would react. I also didn't find that the story flowed as well as some of Mabry's prior books. All in all though, "Heart Failure" does provide some solid entertainment, and I really enjoyed the authentic feel to the scenes that take place in the hospital and with Carrie's various patients. You can tell that Mabry has first-hand experience as a physician, as this fact shines through the pages.

I give this book a mild recommendation and rating of 2.5 out of 5 stars.
Book has been provided courtesy of the publisher, Thomas Nelson, and the Booksneeze program, for the purposes of this unbiased review.
about the author....﻿

Dr. Richard Mabry is a retired physician, past Vice-President of the American Christian Fiction Writers, and the author of five published novels of medical suspense. His books have been finalists in competitions including ACFW’s Carol Award and Romantic Times’ Inspirational Book of the Year. His novel, Lethal Remedy, won a 2012 Selah Award from the Blue Ridge Mountain Christian Writers Conference. His most recent medical thriller, Stress Test (Thomas Nelson), was released in April of this year, and will be followed by Heart Failure in October.